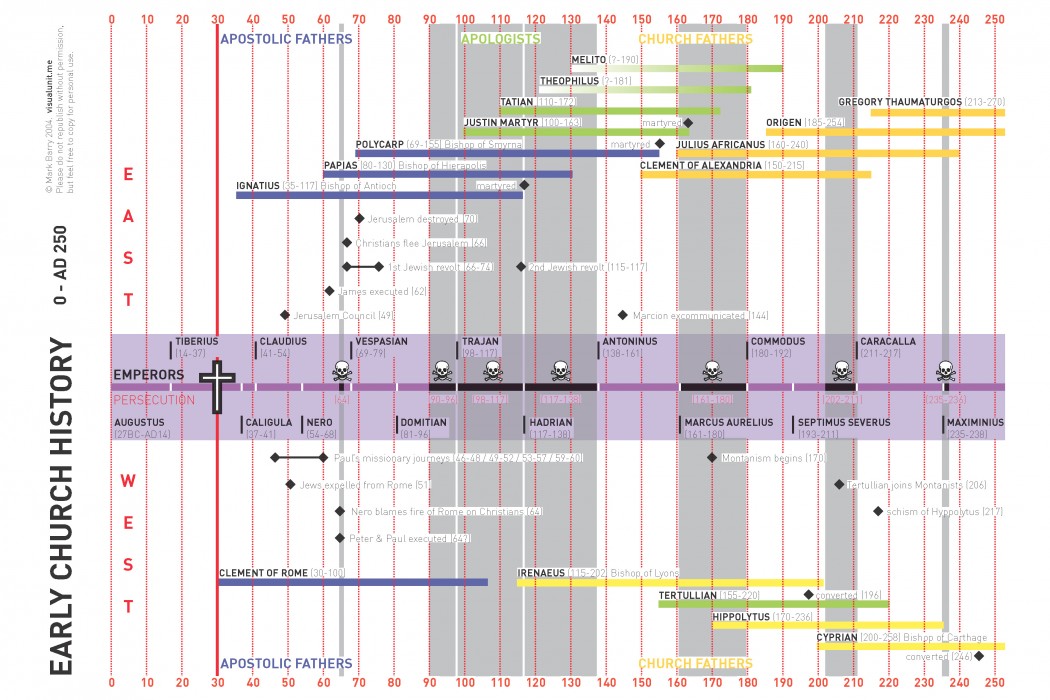 Today lesson by, Richard Thornhill “ Early Church History”. “The Development of the early Church,” Part I.

I am grateful for Richard Thornhill for his contribution to the study of Church History. All question and comment will be forwarded to Richard.

Have you ever sat in a church service and looked around at the building and observed the services as if a visitor for the first time? Have you wondered if Jesus or one of the Apostles were to visit your community which church would they attend – and if they would recognize the sequence of events? Would they be pleased?”

Many have asked these same questions but where does one go to find answers? First, define the church. The church is the body of believers, not buildings. There were no church buildings for about 200 years after the resurrection. If buildings were built for the church to gather, it would have been easy for the Romans to find the Christians of any community or city during the persecution periods of the Roman Empire. Being a Christian believer before 313 A.D. often meant martyrdom. After 313 with the Edict of Milan by the Emperor Constantine when Christianity was decreed acceptable and even blessed financially by various Emperors.

Today we look at the many denominations, the various liturgies, the clerical garments and hierarchy and the holidays and see great differences. Actually, none of those existed until centuries after the First Century.

One turns to read the New Testament and finds no prescribed order of a worship service, no holidays called Christian holy days, no ecclesiastical order and no hierarchy of power. So, how did all these things evolve and why?

We must then turn to church history and endeavor to trace the origins of each of these aspects of what is now called Christianity. Our greatest obstacle during the research is our tendency to insert present conceptions and misunderstanding back into the history of events. Can you image 10 or even 50 years after the resurrection there being a Pope dressed in the papal garments? (Matthew 23:9). The Roman Catholic Church did not even exist until many centuries later (the Roman church as we know it today).

The earliest church historian was Eusebius (260-339 A.D.). He lived during the persecution and lived through it to personally meet the Emperor Constantine. He was a scholar and made great use of the library in Caesarea to record events and development of the church until his time. He documented many of his recorded events.

By the time of Eusebius, the church had already established the LOCAL church leadership under a bishop. In the New Testament Paul mentions elders over every CITY and tells Titus to appoint elders in every CHURCH (Acts 14:23; Titus 1:5). He then calls them a bishop (overseer, v.7) to convey their responsibility. Interesting also, is Acts 20 were Paul calls for the ELDERS of the church in Ephesus (whole city) and charges them with their responsibility to oversee (BISHOP, v.28) all the flock the Lord has made them shepherds (PASTOR), thus using three “titles” to refer to the same individuals to distinguish position and responsibility. Eusebius records the “succession” of leadership of four major centers of Christianity in his day: Jerusalem, Antioch, Rome and Alexandria. He calls them the four “sees” using terms of later development as the church continued to grow and expand throughout the Roman Empire. It is his record the Roman Catholic Church and the Greek Orthodox Church uses to claim authority over the Body of Christ (neither of which were in existence until centuries later).

Eusebius begins his records of successive leadership in each city AFTER the Apostles and gives each the title of “Bishop.” A bishop was a LOCAL presbyter only with no authority over another city or bishop unless he installed them into that position.

Through the year 100 AD: In Jerusalem, he names James (the brother of Jesus, as its first bishop, Emperor Nero), followed bySymeon (Emperor Vespasian), then under the persecution of Trajan: Justus I, Zacchaeus, Tobias,Benjamin and John.

In Antioch of Syria: Euodius (Nero) followed by Ignatius and Hero (Trajan).

The early church used the symbol of the fish to proclaim their identity and mission. The Greek word IXTUS (fish) is an acronym signifying: Jesus Christ, God’s Son Savior. The traditional “cross” was not used until centuries later.

THE ROLE OF THE HOLY SPIRIT IN HERMENEUTICS

THE ROLE OF THE HOLY SPIRIT IN HERMENEUTICS This was one of the first great discussions we had in this group with: Rev. David…