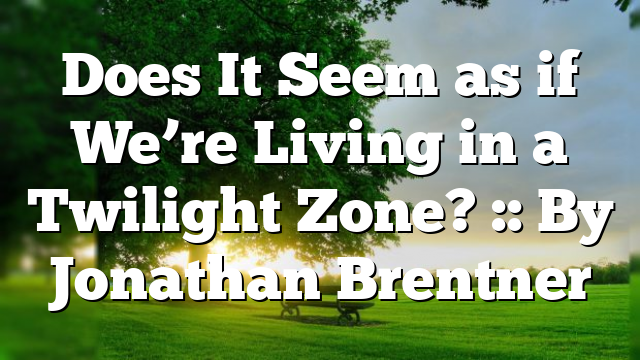 I often feel as though I have ventured into an episode of The Twilight Zone. Rod Serling began his television series in 1959, and those familiar with the show remember Serling’s sense of dystopian fiction that stretched the limits of our imaginations. Who can forget the iconic scenes, plot twists, and bizarre endings?

Life today seems like something that even goes beyond what Rod Serling envisioned for his broadcasts. There’s a vast disconnect between reality and the popular truth that confronts us daily on the mainstream news and social media (via the fact-checkers). It makes my head spin!

It’s dystopian fiction at its best, but this time it’s not a TV show depicting a make-believe world. The media spins its lies as reality and mainstream media addicts readily believe them.

Janet Yellen, the U.S. Secretary of the Treasury, recently bragged about the health of America’s economy. This is gaslighting at its best. Soaring food, fuel, and natural gas prices have stretched many people, especially those on fixed incomes, well beyond their breaking point. And the current crisis in America is just the beginning of the turmoil that many predict will grow steadily worse.

JPMorgan Chase CEO Jamie Dimon recently warned about a coming “economic hurricane” for later this year. He is just one of many voices warning of the coming severe economic storm that will hit America as it has already in many other nations.

I could cite many other examples of where today’s messages on the mainstream and social media do not line up with reality. Some call it “gaslighting,” and it’s surely all that. I like the term “dystopian fiction” as a description of the wide gulf between the “popular line” and reality that’s become the fog of living in this Twilight Zone.

The Fog of the Twilight Zone Invades the Church

Walking into many churches today is also like entering a Twilight Zone. There we hear a message that life is all good and we can experience our “best life now.” Five-year plans are made without even a fleeting thought of Jesus’ imminent appearing or the dark threatening clouds on our horizon.

It’s like a church shrouded in fog so that it’s unaware of the outside world and the many prophetic signs telling us that we live in the last days.

I am reminded again of Kari Jobe’s song: Amen (Simple Gospel). It begins with wonderful words affirming the Gospel but ends with a false message of hope, which exemplifies the disconnect with reality that we find in far too many churches today.

The words below come from the last stanza of her song:

Such sentiment sounds great, but it’s not what the Bible teaches.

First, the song makes the church the object of our hope rather than Jesus. Many today believe that the church will so change the world that it, not Jesus, will initiate the millennium. The Lord thus returns afterward rather than before this time of peace.

Even pastors that reject such teaching communicate a message exalting the church as our refuge during perilous times.

Second, the words quoted above from the song do not agree with what the Bible says about the day in which we live. Biblical prophecy pictures the last days as being awash in lawlessness, deception, extreme wickedness, corruption, and violence. This is today, and it’s all leading to the rule of the antichrist.

The words to the song tell us that “the future is bright.” However, I live in a country that’s screaming for God’s judgment. A nation led by fanatical advocates of abortion up to birth and all that the LBGTQ stands for surely invites a stern response from God. Adding fuel to the fire, Biden recently advocated the dividing of Jerusalem and a radical two-state solution for Israel with pre-1967 boundaries that will leave the nation defenseless against its foes.

So far, the Lord has been remarkably patient with the U.S.

Jesus’ Imminent Appearing is the Reason for Our Bright Future

Our future is glorious and bright, however, solely because of Jesus’ imminent appearing.

The myriad of signs pointing to the approaching seven-year Tribulation tell us that Jesus is coming for us soon. We live on the cusp of the Lord fulfilling His promises to us in passages such as John 14:1-3, Philippians 3:20-21, and 1 Thessalonians 4:13-18.

The Rapture signifies a bright future for us; it marks the beginning of an eternal and amazing adventure for us.

Sadly, many saints today never hear any mention of the over-the-top joy and excitement ahead for them. It’s a truly glorious message!

A sound biblical outlook on what lies ahead yields unexplainable and wonderful peace within us. I cannot imagine getting up each morning to face this world without the eternal perspective we see throughout Scripture. The world is a scary place, but an understanding of biblical prophecy yields the fruit of peace deep within us.

We live in the season of Jesus’ appearing to take us home to heaven. It’s not about date-setting but about understanding the multitude of signs God gave us in His Word that reveal the nearness of the Rapture.

Jesus rebuked the Pharisees and Sadducees who did not recognize the signs that their Messiah stood in their presence (Matthew 16:1-4). Would not the Lord have a similar reprimand for church leaders today who remain oblivious to all the indications that the Tribulation period is rapidly approaching?

We will certainly not endure the wrath of God that the apostle John describes for us in Revelation 6-18. However, because of the day in which we live, we must be ready for perilous times ahead before Jesus whisks us up to the place that He’s preparing for us.

Or then again, the Lord could come for us today!

If you have not yet ordered and read The Triumph of the Redeemed — An Eternal Perspective that Calms Our Fears in Perilous Times, please consider doing so. Like the title says, it provides calming reassurance for the troubling times in which we live and explains why we can face our troubled world with an unshakeable peace within us. Thanks!!

Note: Please consider signing up for my newsletter on the home page of my website at https://www.jonathanbrentner.com. It will help me in reaching more people. Thanks!

The post Does It Seem as if We’re Living in a Twilight Zone? :: By Jonathan Brentner appeared first on Rapture Ready.

Biden says ‘new world order’ is coming and ‘America must lead it’  While addressing the Business Roundtable on Monday, President Joe Biden said there is “going to be a new world order” that must be led by the United States. Strong and shallow M6.4 earthquake hits Luzon, Philippines A strong earthquake, registered by the USGS as M6.4, […]