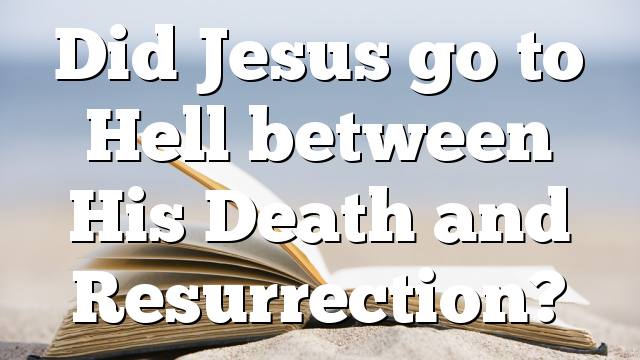 It is surprising to find that the phrase “he descended into hell” was not found in any of the early versions of the Creed (in the versions used in Rome, in the rest of Italy, and in Africa) until it appeared in one of two versions from Rufinus in A.D. 390.

Then it was not included again in any version of the Creed until A.D. 650.

This means, therefore, that until A.D. 650 no version of the Creed included this phrase with the intention of saying that Christ “descended into hell”—and the only version to include the phrase before A.D. 650 gives it a different meaning.

Later when the phrase was incorporated into different versions of the Creed that already had the phrase “and buried,” some other explanation had to be given to it.

There have been three possible meanings proposed throughout church history:

What does the Bible say? 5 passages used to support the descent into hell

There are five Bible passages used to support the idea that Christ really did descend into hell between his death and resurrection.

This is part of Peter’s sermon on the Day of Pentecost, where he quotes Psalm 16:10: “because you will not abandon me to the realm of the dead [KJV: “leave my soul in hell”], nor will you let your faithful one see decay.”

Does this mean Jesus entered hell? Not necessarily. Peter is using David’s psalm to show that Christ’s body did not decay—he is therefore unlike David, who “died and was buried, and his tomb is here to this day”

But this passage hardly teaches that Christ descended into hell. The point of the passage is that Paul is telling people not to ask these questions, because Christ is not far away—he is near—and faith in him is as near as confessing with our mouth and believing in our heart (v. 9).

Here Paul writes, “In saying, ‘He ascended,’ what does it mean but that he had also descended into the lower parts of the earth?”

Does this mean that Christ “descended” to hell?

It is at first unclear what is meant by “the lower parts of the earth,” but another translation seems to give the best sense: “What does ‘he ascended’ mean except that he also descended to the lower, earthly regions?” (NIV). Here the NIV takes “descended” to refer to Christ’s coming to earth as a baby (the Incarnation). The last four words are an acceptable understanding of the Greek text, taking the phrase “the lower regions of the earth” to mean “lower regions which are the earth.”

Paul is saying that the Christ who went up to heaven (in his ascension) is the same one who earlier came down from heaven (v. 10). That “descent” from heaven occurred, of course, when Christ came to be born as a man. So the verse speaks of the incarnation, not of a descent into hell.

This passage says: “For Christ also suffered once for sins, the righteous for the unrighteous, to bring you to God. He was put to death in the body but made alive in the Spirit. After being made alive, he went and made proclamation to the imprisoned spirits—to those who were disobedient long ago when God waited patiently in the days of Noah while the ark was being built.”

For many people this is the most puzzling passage on this entire subject. Let’s unpack several questions surrounding this text:

But these interpretations fail to explain adequately either the passage itself or its setting in this context. Peter does not say that Christ preached to spirits generally, but only to those “who formerly did not obey…during the building of the ark.” Such a limited audience—those who disobeyed during the building of the ark—would be a strange group for Christ to travel to hell and preach to.

Moreover, the context of 1 Peter 3 makes “preaching in hell” unlikely. Peter is encouraging his readers to witness boldly to hostile unbelievers around them. He just told them to “always be prepared to give an answer to everyone who asks you” (1 Peter 3:15 NIV). This evangelistic motif would lose its urgency if Peter were teaching a second chance for salvation after death. And it would not fit at all with a “preaching” of condemnation.

Does 1 Peter 3:18–20 refer to Christ preaching to fallen angels?

To give a better explanation for these difficulties, several commentators have proposed taking “spirits in prison” to mean demonic spirits, the spirits of fallen angels, and have said that Christ proclaimed condemnation to these demons. This (it is claimed) would comfort Peter’s readers by showing them that the demonic forces oppressing them would also be defeated by Christ.

However, Peter’s readers would have to go through an incredibly complicated reasoning process to draw this conclusion when Peter does not explicitly teach it. They would have to reason from (1) some demons who sinned long ago were condemned, to (2) other demons are now inciting your human persecutors, to (3) those demons will likewise be condemned someday, to (4) therefore your persecutors will finally be judged as well. Finally Peter’s readers would get to Peter’s point: (5) Therefore don’t fear your persecutors.

Does it not seem too farfetched to say that Peter knew his readers would read all this into the text?

Another explanation is that Christ, after his death, went and proclaimed release to Old Testament believers who had been unable to enter heaven until the completion of Christ’s redemptive work.

But again we may question whether this view adequately accounts for what the text actually says. It does not say that Christ preached to those who were believers or faithful to God, but to those “who formerly did not obey”—the emphasis is on their disobedience. Moreover, Peter does not specify Old Testament believers generally, but only those who were disobedient “in the days of Noah, during the building of the ark” (1 Peter 3:20).

The most satisfactory explanation of 1 Peter 3:18–20 seems rather to be one proposed (but not really defended) long ago by Augustine: the passage refers not to something Christ did between his death and resurrection, but to what he did “in the spiritual realm of existence” (or “through the Spirit”) at the time of Noah. When Noah was building the ark, Christ “in spirit” was preaching through Noah to the hostile unbelievers around him.

This interpretation is very appropriate to the larger context of 1 Peter 3:13–22. The parallel between the situation of Noah and the situation of Peter’s readers is clear at several points:

Such an understanding of 1 Peter 3:18–20 seems to be by far the most likely solution to a puzzling passage.

This fifth and final passage that supports Jesus’ descent into hell says, “For this is why the gospel was preached even to the dead, that though judged in the flesh like men, they might live in the spirit like God.”

Does this verse mean that Christ went to hell and preached the gospel to those who had died? If so, it would be the only passage in the Bible that taught a “second chance” for salvation after death and would contradict passages such as Luke 16:19–31 and Hebrews 9:27, which clearly seem to deny this possibility.

This is a common explanation, and it seems to fit this verse much better. It finds support in the second word of the verse, “this,” which refers back to the final judgment mentioned at the end of verse 5. Peter is saying that it was because of the final judgment that the gospel was preached to the dead.

Thus, “the dead” are people who have died and are now dead, even though they were alive and on earth when the gospel was preached to them.

We conclude, therefore, that this last passage, when viewed in its context, turns out to provide no convincing support for the doctrine of a descent of Christ into hell.

3 passages that indicate Jesus did not descend to hell

In addition to the fact that there is little if any biblical support for a descent of Christ into hell, there are some New Testament texts that argue against the possibility of Christ’s going to hell after his death.

Jesus’ words to the thief on the cross, “Today you will be with me in Paradise” (Luke 23:43), imply that after Jesus died his soul (or spirit) went immediately to the presence of the Father in heaven, even though his body remained on earth and was buried.

Some people deny this by arguing that “Paradise” is a place distinct from heaven, but in both of the other New Testament uses the word clearly means “heaven”: in 2 Corinthians 12:4 it is the place to which Paul was caught up in his revelation of heaven, and in Revelation 2:7 it is the place where we find the tree of life–which is clearly heaven in Revelation 22:2 and 14.

In addition, the cry of Jesus, “It is finished” (John 19:30) strongly suggests that Christ’s suffering was finished at that moment and so was his alienation from the Father because of bearing our sin. This implies that he would not descend into hell, but would go at once into the Father’s presence.

Finally, the cry, “Father, into your hands I commit my spirit” (Luke 23:46), also suggests that Christ expected (correctly) the immediate end of his suffering and estrangement and the welcoming of his spirit into heaven by God the Father (note Stephen’s similar cry in Acts 7:59).

If Jesus didn’t descend into hell, then what happened when he died?

These texts indicate, then, that Christ in his death experienced the same things believers in this present age experience when they die: his dead body remained on earth and was buried (as ours will be), but his spirit (or soul) passed immediately into the presence of God in heaven (just as ours will).

Then on the first Easter morning, Christ’s spirit was reunited with his body and he was raised from the dead—just as Christians who have died will (when Christ returns) be reunited to their bodies and raised in their perfect resurrection bodies to new life.

This fact has pastoral encouragement for us: we need not fear death, not only because eternal life lies on the other side, but also because we know that our Savior himself has gone through exactly the same experience we will go through—he has prepared, even sanctified the way, and we follow him with confidence each step of that way.