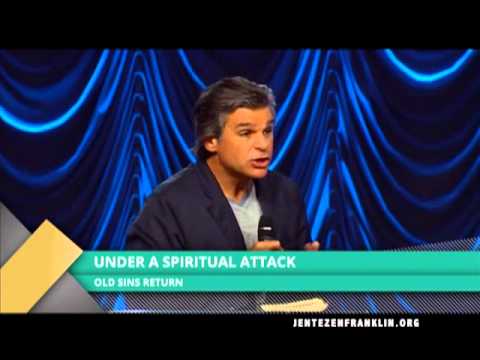 The devil knows the power of atmosphere, and as believers, we need to know it as well. Whenever possible, Satan will try to tempt you into the wrong atmosphere in order to make it easier for you to fall into sin. Think about it—would you be more likely to fall into sinful behavior in a library or in a wild club or party scene? The answer is pretty obvious because it’s the atmosphere that makes the difference. The atmosphere creates a climate, and the climate creates a culture. If the enemy can get you in his culture, he knows he can get you to sin.

We are at war, but we cannot fight in the spirit realm with our natural ability, education or money. We can only fight spirit with spirit—”For the weapons of our warfare are not carnal, but mighty through God to the pulling down of strongholds” (2 Cor. 10:4).

As believers, we have been given authority over demons. The only way demons can get a stranglehold on us is when we deliberately and persistently walk in sin.

If a believer encounters what he thinks is a true manifestation of demonic oppression or possession, he has the authority and the power of the Holy Spirit to expel that demonic power. There are certain signs of demonic possession to look for when trying to determine if a demon is at work in someone.

A sure sign of demonic possession is someone empowered with incredible strength. Demons will often energize people in this way (Mark 5). Those who are demon possessed may have spontaneous reactions of uncontrolled cursing when the name of Jesus Christ is spoken. An evil spirit can cause contortions in facial features and countenance. People’s eyes can become glazed and even roll back in their heads. Their appearances and even their voices will change. When people are set free, they will usually come immediately back into their “right minds.” Their voices will normalize, and you will see a total change in demeanor.

Extreme caution should be used when discerning whether or not someone is demon possessed. In my more than 25 years of ministry, I have only encountered five people who I was convinced needed some form of exorcism. It is my experience that, when attempting to cast out demons, it should almost always be done in a private setting with a pastor or other mature, balanced spiritual leaders present.

The position of every born-again believer should reflect James 4:7, which says, “Resist the devil and he will flee from you.” Jesus Christ, in His ultimate commission to the church, said, “In My name they will cast out demons” (Mark 16:17). While we should always seek the help of a mature Christian leader when dealing with challenging ministry situations, we should not be afraid to take authority over demons as believers in Jesus Christ.

Bring Everything to the Light

Satan and his demons prefer to do their work without being exposed. They definitely don’t like to be identified and cast out. Demons will resist exposure and will resist anyone who attempts to bring the light of God upon their hidden works. Once the enemy has gained ground and set up the kind of culture he desires, he wants us to buzz off and leave him be.

Some ministries unconsciously fall into the trap of the enemy by leaving him alone. Ministers of the gospel who don’t want to deal with the subject of demons often say that all they need to do is preach Jesus. I’m certainly not against preaching Jesus, but I also find in Luke 4:18 that we are called to preach deliverance to the captives. Jesus was a deliverance preacher. In Mark 6:13, He cast out many demons.

Today, most ministries—including mine—cast out few, if any, demons. Many don’t want to deal with this aspect of the ministry of our Lord. Well-meaning Christians, pastors included, feel it unnecessary to discuss or teach on spiritual warfare and are quick to label anyone who does spend time studying and teaching in these areas of Scripture “overboard,” “radical” or a “demon chaser.” But we must make no mistake—avoidance of spiritual warfare teaching is just what the enemy wants. The less you discuss and attack his kingdom, the more he will be able to operate under the cover of darkness.

According to Ephesians 6:12, demons are identified as “the rulers of the darkness of this world.” A demon’s level of authority to operate is based on the darkness in a person’s life. The more darkness, the more authority they have. In contrast, when revelation from God’s Word concerning the devil’s works and schemes comes into a person’s mind, then light comes. And when light comes, the darkness is dispelled—and the rulers of the darkness along with it. Their power is broken by the power of God’s light. That is why Satan and his demons would rather be left alone in the dark.

Mark 6:13 says that Jesus and His disciples “cast out many demons.” Part of Jesus’ mandate was to expose the powers of darkness and set the captives free. That mandate has been passed on to us. The Lord is raising up ministries that will not leave demons alone, but will expose and defeat them with the power and light of God’s truth. We are called to challenge, confront and expose the works of darkness.

The religious system of Jesus’ day would not disturb Satan and his demons. Instead, they coexisted with them. Everything was humming right along in the darkness until Jesus entered the temple and cast out those who were in cahoots with the devil. He infuriated and exposed Satan and his demons by teaching and preaching the truth of God’s Word. Jesus knew that you can’t cast the devil out if you’re best friends with him.

Create a Climate of God’s Presence

The enemy is out to set up a culture that is devoid of the power of God. Even in the church, there is little difference between some Christians’ lifestyles and the world’s lifestyles. The morals are very much alike and reflect one another. Satan is able to set up his culture when we respond to any of the spiritual influences or activities I’ve just described because we have created an atmosphere that enables the devil. We can counter Satan’s atmosphere by creating a climate for the presence of God.

The atmosphere you sustain over time will create a climate, which I also call a predictable pattern. For example, you might live in an area that has a hot day now and then, but that does not create a hot climate. A hot climate is what you would experience in a tropical area where temperatures are always balmy. A climate is created when the same thing is repeated over and over.

Whenever we sustain a spiritual atmosphere of sin and iniquity, a demonic climate takes shape. Conversely, whenever we sustain a spiritual atmosphere of praise and thankfulness, a climate of God’s presence begins to form. If a sustained atmosphere creates a climate, then it follows that a climate creates a stronghold. It is the stronghold that defines the culture of a place. Demonic spirits fight for control in order to control the culture of our lives and even of nations and set up strongholds.

Impose the Authority of the Kingdom

I have heard it said that Christians are not to be spiritual thermometers but spiritual thermostats. In other words, we are not merely supposed to detect the spiritual climate as a thermometer detects the existing temperature in a room; we are to change the spiritual climate, imposing the authority of the kingdom of God wherever we go! It is important to understand atmospheres and our ability to change them because Jesus has authorized and empowered us in this arena.

Jesus changed the atmosphere in His region, and we have the power to change the atmosphere and usher the presence and power of God in our situations, in our homes and in our churches. This is how we keep the devil out—by imposing the authority of the kingdom of God on him.

Keep a spirit of prayer and praise in your life, and it will create the right atmosphere around you. When you have unsaved loved ones who need to hear the message of the gospel, but something keeps blocking them from hearing and receiving, do not back down. Instead, change the atmosphere with prayer and praise, stand and fight, filled with the Holy Spirit.

Go to the throne of grace on your knees and intercede for them. God will meet you and partner with you to bring His kingdom to bear on the kingdoms of this world.

Souls are at stake. People we love are bound in sin, and many still stumble in darkness. But we have a remedy, and His name is Jesus. He has given us the authority to stand between new converts, between our families, including our children, and the spirit of this age that wants to pervert the truth of God and turn everyone away from the light.

We are to fast, pray, praise, worship, intercede, and stand and wage war in the spiritual realm so that our enemy, the devil, cannot work his way into our lives and squeeze the life out of us, rendering us ineffective for God. Don’t allow yourself to grow weary in doing the work of the kingdom. Remember the words of Revelation 11:15: “The seventh angel sounded, and there were loud voices in heaven, saying: ‘The kingdoms of the world have become the kingdom of our Lord, and of His Christ, and He shall reign forever and ever.'”

Jentezen Franklin is the pastor of Free Chapel in Gainesville, Georgia; Gwinnett, Georgia; and Orange County, California. He is a popular conference speaker, and his nationally televised program, Kingdom Connection, is seen weekly on national and international networks. He has written several books, including Believe That You Can, Fear Fighters, and the New York Times best-seller Fasting. He and his wife, Cherise, have five children.

FacebookTwitterSubscribe
Subscribe to receive all news to your email or phone: [wysija_form id="1"]
demonfreedevelopinglifezone

Dr. Joel Wallach is a man on a mission to educate and inform people around the world on safe and inexpensive alternatives to traditional…