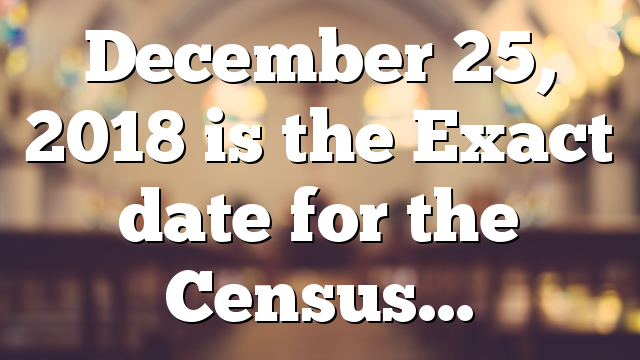 Exact date for the Census of Quirinius and JESUS

Let’s look at the Biblical passage in question and then we’ll take it apart to see what specific historical claims are made. “Now in those days a decree went out from Caesar Augustus, that a census be taken of all the inhabited earth. This was the first census taken while Quirinius was governor of Syria. And everyone was on his way to register for the census, each to his own city. Joseph also went up from Galilee, from the city of Nazareth, to Judea, to the city of David which is called Bethlehem, because he was of the house and family of David, in order to register along with Mary, who was engaged to him, and was with child. While they were there, the days were completed for her to give birth. And she gave birth to her firstborn son; and she wrapped Him in cloths, and laid Him in a manger, because there was no room for them in the inn.”(NASB)

In the Biblical account, we know these facts are presented:

Further, Matthew chapter 2 reports that Herod the Great ordered the slaughter “all the male children who were in Bethlehem and all its vicinity, from two years old and under”(Matt 2:16). We know that Herod died 4-2 B.C., so Jesus birth had to have been before his death – most likely by two or more years. Given these facts, scholars generally date Jesus’ birth anywhere between 6 B.C. to 4 B.C.

Now, let’s turn our attention to the Josephus passage. In 17.13.5 of The Antiquity of the Jews, Josephus writes: “So Archelaus’ country was laid to the province of Syria; and Cyrenius, one that had been consul, was sent by Caesar to take account of people’s effects in Syria, and to sell the house of Archelaus.”1

From the Josephus account we derive the following facts:

We also know from other historical records that Herod Archelaus was deposed in 6 A.D., so this census must be about 6 or 7 A.D. So, the question goes, if Herod the Great died in 4 B.C. and Josephus tells us Quirinius’ census wasn’t until 6 A.D., then isn’t this a contradiction?

More than One Census

Although on its face we seem to have a difficulty here, there are several pieces that we must consider before jumping to the conclusion that Luke and Josephus were speaking about the same event. Indeed, it seems that Caesar Augustus was the type of leader who ordered many censuses in his day. Records exist to show that Roman-controlled Egypt had begun a census as early as 10 B.C. and it was repeated every 14 years. And Augustus himself notes in his Res Gestae (The Deeds of Augustus) that he ordered three wide-spread censuses of Roman citizens, one in 28B.C., one in 8 B.C. and one in 14 A.D.2 In between there are several other censuses that happened locally across Rome. Luke’s account corroborates the idea of multiple censuses for Judea when he writes “This was the first census taken while Quirinius was governor of Syria.” Certainly, the word “first” implies that more than one census happened.

On another occasion, an enrollment of all the people of the empire happened to swear an oath of allegiance to Caesar. In Chapter 34 of Res Gestae Augustus also notes, “When I administered my thirteenth consulate (2 B.C.E.), the senate and Equestrian order and Roman people all called me father of the country, and voted that the same be inscribed in the vestibule of my temple”.3 Josephus also mentions a time “When all good people gave assurance of their good will to Caesar”.4 These types of tributes would also require an enrollment of individuals from across the empire. Orosius, a fifth century Christian, links this registration with the birth of Jesus saying that “all of the peoples of the great nations were to take an oath”.5

Taking all of this together, we have at least three censuses in the area of Judea – one in 8 B.C., one starting around 2 B.C. and one in 6 A.D. The only point that is really in question, then, is whether Luke was mistaken in ascribing this census to the time when Quirinius was in the role of Syrian Governor. Since Quirinius wasn’t governor of the Syrian province until after Archelaus was deposed, critics claim Luke misidentified the census as the smaller one, which happened some 8-10 years after Herod died. Either Luke is wrong on his dating of Jesus’ birth or Matthew made up the story of Herod the Great and the killing of the infants. Is this an accurate objection?

Fr. Francis MacNutt was perhaps the lead figure in the Catholic Charismatic Renewal. He learned his healing theology from Agnes Sanford at CFO camps,…