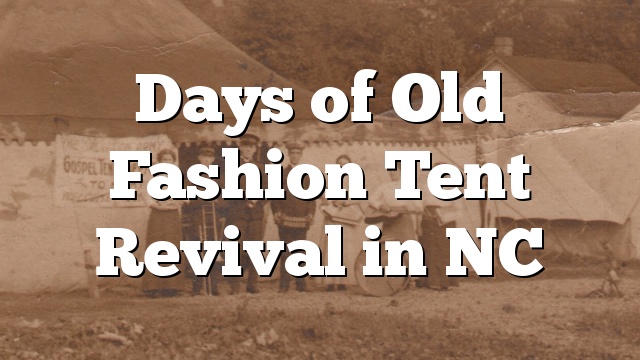 A remarkable move of God that began last May in Burlington, North Carolina, stirred many hearts through July. Pastor Randy Hobbs had only scheduled evangelist C.T. Townsend to spend a week in his church, but as the power of God fell, many were saved and the revival stretched on in a borrowed tent for weeks—filled to capacity every night.

“The only reason the (revival) meeting shut down (in July) is because we couldn’t keep the tent any longer. The man needed the tent back,” recounts D.R. Harrison, one of those saved during the revival.

“On the last night of the meeting, 62 were saved. The tent was packed full. The power of God was so real. It was just unbelievable. It broke our hearts to shut it down. We tried every angle to keep it going,” he says.

No one knew what would happen when Townsend and his team re-launched their crusade two weeks ago under a newly constructed tent holding 5,000 people.

“It’s been incredible,” Harrison exclaims. “This last Friday night was our biggest night with over 4,000 people, and there were 78 saved.

During the first two weeks of the crusade, 130-140 made professions of faith, and crowds averaged about 2,000 a night. The momentum seems to be building, according to Harrison.

Some of the services have been viewed over 100,000 times on the internet, and their livestream crashed May 12 due to traffic that overwhelmed server capacity.

“I’m not sure how long the meeting will go,” Harrison says. “That’s all up to God. We believe He can do exceedingly, abundantly above what He did last year.

“Last Friday night (the 12th), there were people in attendance who had driven from Florida, Wisconsin, Minnesota and even Oregon. “A man and his entire family drove from Oregon to be under the tent,” Harrison reports.

“Teenagers are getting saved left and right,” he notes. “That’s the most thrilling part. Some have written off the young people, saying they’re too far gone. But that’s not true. We’re seeing the total opposite. Young people are hungry for God. They want something real.”

Townsend gives all the glory to God for the results. “There is no man who can make happen what happened last night (May 12th),” he said in a Facebook video update. “People are hungry for God.”

Townsend related the story of one man who did not plan to attend, but was trapped in traffic heading to the meeting:

“He got stuck on the interstate in crusade traffic. He said finally he got out of his car and walked around the tent to see what was going on. He heard the gospel and walked the aisle and got saved. He said, ‘Preacher, I haven’t been anywhere near a church in the last 10 years. I’ve been so far away from God, never been a saved man.’

“It’s amazing to me to see the incredible drawing power of God to bring people to that tent,” Townsend says.

D.R. Harrison has become one of the primary evangelists associated with the Burlington revival after he was powerfully saved last year. “A year ago, I was on a barstool, drinking, lost—I wanted nothing to do with God,” Harrison relates.

Since July, he and Townsend have had full speaking schedules, touring the southeastern U.S., visiting churches as agents of revival.

“If you told me what I would be doing a year later, I would have laughed and cussed you. It doesn’t even make sense. No one can analyze it. Only God could do what He’s done in the last year,” he says.

“Brother CT has seen in the last year close to 3,000 people walk the aisle and trust Christ,” Harrison reports. “Since I was called to preach last May, the Lord has allowed me to see over 1,000 saved.

“God is moving, and I believe we don’t have much time left. He is trying to save as many people who will possibly receive Him before He comes back.

“As much as people blaspheme and hate God, God still loves us so much and has so much mercy. He is still giving people another chance. He doesn’t want any to go to hell. He wants all to come to repentance. We are seeing that fulfilled in front of our eyes. God is moving in a way I could have never dreamed.”

Harrison’s speaking schedule is booked through 2019, including international trips to the Philippines and Peru. “It is amazing how God is saving people and moving,” he says. “It’s not just Burlington. There are sparks of revival all over the world. Whether it’s a church or a tent, God is moving.”

He recently finished a three-week tour of Mississippi, Florida and South Carolina. At a tent meeting in Mississippi, God saved almost 100 people. “Most were teenagers, kids who were cutting themselves, hooked on drugs and pornography. When they get around the power of God, they fall under Holy Ghost conviction. They were walking the aisle and getting saved and weeping their way to Jesus,” he says.

One man got saved in Mississippi, and after the service, his 15-year-old daughter walked up to Harrison, weeping.

“You will never know how mean my daddy was to me,” she told Harrison. “I thank you for minding the Lord and coming to Mississippi and preaching the gospel so my daddy could get saved. Now I have a brand-new daddy.”

“God changed their whole lives,” Harrison says. “He [was] one of the meanest men in that town.”

“There were deacons getting saved and lost church members and drunks and drug addicts. God is doing that everywhere,” he says.

“We are focused on one thing, and that is to see souls saved and for God to send revival to this generation. Nothing else matters in life. Right now God is pouring out His Spirit. It is amazing to see what He’s doing.”