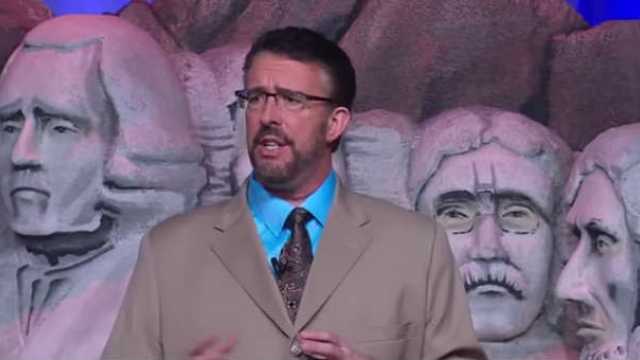 MAJOR ALERT: I have just been informed of a major plan by the extreme left, that has the support over 100 House members and numerous Senators, that if passed would make it a crime for churches and ministers to publically say the gay lifestyle is a sin, or not allow them to use your church for their own meetings. It would become a crime and the Justice Department would investigate the allegations of “discrimination”, and if the church or minister is “guilty” leveling fines, or if need be incarcerating the leaders. The majority of the politicians among these church haters that are intolerant to traditional religious beliefs happen to be with linked with the “donkey party,” and most have no liking for conservative Christians and will use the law to “Silence the religious right,” as they call it. We will soon find out within the “church” who is on the Lord’s side of the Scriptures and who is “halting between two opinions.” It is the days of Elijah all over again, where the Spirit of Jezebel is after the heads (voices) of the men of God. There is serious government persecution coming to all who stand for truth, and when the “left” becomes violent, as did the men of Sodom against Lot, threatening to rape him for his rebuke of their iniquity, God will change the game and the United States hedge will be removed and catastrophic natural disasters will be unleased. Please mark this day, this post and repost to as many as possible. We must pray for God’s Word to always prevail. Also, a UK report from scientists stated that in the future the earth in in danger of a catastrophic meteor shower! Hummm – I recall Jesus predicting the “stars falling from heaven and the powers of heaven being shaken.” Sounds like the last days! – more to come on periscope

If so, what will the church do about it? Scroll DOWN for the 2020 update on this bill

MORE on this TOPIC:

Assembly Bill 2943: THIS IS what happened to this bill from 2015: California Dems prepare for crackdown on churches

Christians across the nation are expressing grave concerns over a proposed California law that would outlaw speech dealing with certain issues – including homosexuality and gender identity – by clergy members, licensed counselors and others.

Assembly Bill 2943, authored by Democratic Assemblyman Evan Low, would utilize the state’s existing consumer fraud statute to classify gay conversion therapy as a fraudulent practice.
State senators passed the legislation last Thursday and the Assembly is poised to take up a final vote before the bill is sent to Democratic Gov. Jerry Brown’s office.

“The faith community, like anyone else, needs to evolve with the times,” Democratic Assemblyman Al Muratsuchi said during debate on the legislation. “The science is clear. The claim that the First Amendment can be used as a defense for promoting fraudulent conduct is a fallacious argument.”

Dr. Paul Chappell, the pastor of Lancaster Baptist Church and the president of West Coast Baptist College, said there is a groundswell of opposition rising up among Christians and conservatives to the Assembly bill. “This is an encroachment by the state,” Chappell said on the Todd Starnes Radio Show. “It’s time for Christians all across America to recognize it’s an attack on our faith.”

Alliance Defending Freedom attorney Matt Sharp said the legislation “makes it unlawful for any person to sell books, counseling services, or anything else that helps someone overcome unwanted same-sex attraction or gender identity confusion. As a result, it could be a violation if a pastor encourages a congregant to visit the church book store to purchase books that help people address sexual issues, perhaps including the Bible itself, which teaches about the importance of sexual purity within the confines of marriage between a man and woman,” Sharp said.

The Alliance Defending Freedom called the breadth of the censorship is staggering. The alliance says that:

Republican Assemblyman Travis Allen warned that the bill’s language is so broad it could even lead to the Bible being targeted. “The Bible’s teachings, if taken literally, could very clearly be a direct violation of AB 2943,” he said on the Todd Starnes Radio Show. “The faith community has every reason to be up in arms about this. Once Democrats start talking about banning books, this is a road we do not want to go down.”

Democratic state Sen. Scott Wiener dismissed concerns that the legislation could eventually lead to a ban on Bible sales. “This bill does not prohibit the sale of the Bible – that’s an argument that we’ve heard – that’s untrue,” Wiener told the Los Angeles Blade. “It does not in any way prohibit free speech. It doesn’t prohibit anyone from speaking with a counselor, including a religious counselor regarding their sexual orientation, as long as no money is exchanged, as long as no services are sold.”

David French, writing in National Review, said the law would “loom over booksellers and churches, establishing a chilling effect and providing a pretext for even more secular booksellers to refrain from stocking certain Christian titles – no matter how well-reasoned.”

Low, who is chairman of the state’s LGBT Legislative Caucus, fired back at those concerns. “A church or individual may still practice conversion therapy if they do so without charging for this fraudulent service,” Low wrote on Twitter. “It (the legislation) does not ban Bibles nor does it ban the basic sales of books as some would have you believe.”

However, there is no religious exemption in the proposed bill – and that has Christians across the nation sounding alarm bells.

“Someone might say it’s an extremist thought, but I don’t think it’s extremist at all,” Chappell said on the Todd Starnes Radio Show. “People hate what the Bible teaches. That is absolutely in my opinion where all this is going – towards the Bible and ultimately towards the pulpits that preach the Bible.” Since we live in a country with elected officials it seems like a great time to let them know what our opinion of this bill is. WE MUST pray, and call our house Congress people.

Is this a photo of the Angel of Death?