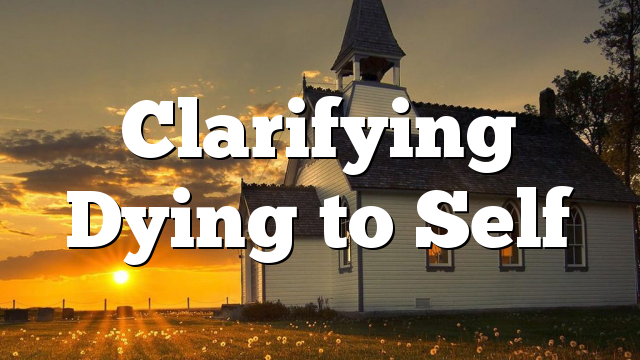 “I have been crucified with Christ. It is no longer I who live, but Christ who lives in me. And the life I now live in the flesh, I live by the faith of the Son of God, who loved me and gave Himself for me” (Gal. 2:20). This was a memory verse as an early Christian, but it sure has a lot more meaning now that I’ve grown spiritually from those younger days.

Before, I saw this scripture as about dying to sin.  But now I understand that I am already dead to sin in Jesus, and I draw on His power within me to overcome. I really like Andrew Wommack’s commentary on this verse, bringing out what it really means to die to self:

“Paul was preaching a death to self, but it is very important to notice how this death took place. Paul was dead through what Jesus did. Paul experienced this death by simply reckoning what had already happened through Christ to be so (Ro 6:11).

Paul was not just dead to self; he was alive to God

“There are people today who have taken the ‘dying to self’ doctrine to an extreme, and instead of being free of self, they are totally self-centered. They constantly think of self. It may be in all negative terms, but it is still self-centered. Truly humble people are ones who are Christ-centered.  Dying to self is not a hatred for self but rather a love of Christ more than self.

“There are false religions that preach a denial of self. The legalistic Jews Paul was preaching against did that. Paul was not just dead to self; he was alive to God. A focus on the denial of self without the enthronement of Christ leads to legalism.”