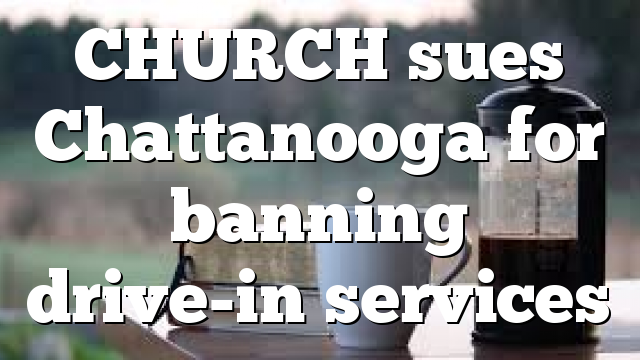 This Easter Sunday, and every Sunday until the pandemic is behind us, if you can stay home, please stay home. We respectfully ask that churches in our area not move forward with “drive-in” worship services or any other kind of public assembly. Allowing people to gather, even in their cars with the windows rolled up, for any length of time will be considered a violation of our shelter-in-place directive. Under the terms of our most recent executive order, you may drive-through a specific drop-off point at your church to make donations or pick-up food and other supplies. Person-to-person contact should be strictly limited, however. For instance, food or supplies should be placed in a car’s trunk or backseat, not handed through a window. All congregants, church staff, and volunteers must wear face masks.

The lawsuit claims the city of Chattanooga violated the First and Fourteenth Amendments and there is no justification for banning drive-in services.

“The City and Mayor have specifically targeted churches by banning drive-in services, despite permitting packed parking lots at retail establishments and drive-in restaurants.”

This stems from a post by Mayor Berke ahead of Easter stating that, “drive-in services . . . even in their cars with the windows rolled up, for any length of time will be considered a violation of our shelter-in-place directive.” The church says its counsel contacted the City Attorney on April 11th, saying they find the city’s interpretation of the stay-at-home order violated the constitution. The church requested the city allow drive-in services, but say they have not received a response. The lawsuit points to a statement from the US Attorney General saying that even in times of emergency the , ““government may not impose special restrictions on religious activity that do not also apply to similar nonreligious activity,” as evidence that the city violated its constitution rights. It also points out that drive-in services are allowed under Tennessee Governor Bill Lee’s order.

The church is asking the court issue a restraining order or injunction prohibiting Chattanooga from enforcing its ban. and a judgement declaring this ban violates the rights to free speech. It’s also seeking damages, court costs, attorney’s fees, and another further relief the church may be entitled.