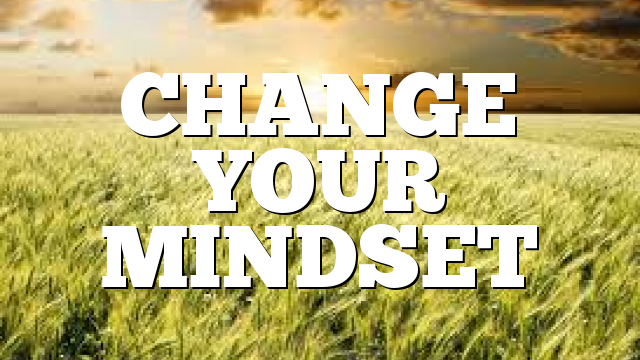 If you don’t CHANGE your mindset regarding your situation the situation will NEVER CHANGE…. The woman with h the issue of BLOOD must have suffered a lot at the hands of problem solvers and but eventually changed her mindset regarding her situation. Instead of seeking answers to her problem from outside she decided to bypass protocol and directly go to the source of her solution ie , the hem of Jesus cloak and TOUCHED IT. The woman, like most of us today might have gone from one anointed minister to another in pursuit of a solution to her affliction but couldn’t find any. The Word says she spent a great part of her finances trying to resolve this 12 year issue of blood but her situation remained unchanged. The woman might have heard of JESUS and his great ministry but because she had enough money to take care of her problem she might have enough money she might have put her trust on her finances to solve her problem and thus ignored the news about the HEALER. If I look at the whole incident of the woman if blood I can say that he inner resolve, a change in her attitude was consequential to her receivi G her deliverance for the Scriptures say // For she said WITHIN HERSELF If I may but touch his garment, I shall be whole.// The words “WITHIN HERSELF” show an inner resolve, a determination, a firm declaration to make a DECISION HERSELF…. regarding her situation and took a step. Whenever a person makes decision from WITHIN. THEMSELVES the outcome of their decision most of the times have direct influence over their situations. The Prodigal Son was in a real dire situation after he squandered his inheritance and was now having a hard time in a self hired job of feeding pigs. He even longed to eat what the pigs were eating but no one was there for give him the pods. The Bible say this// “When he came to his senses, he said, ‘How many of my father’s hired servants have food to spare, and here I am starving to death! 18 I WILL SET OUT and GO BACK to my father and say to him: Father, I have sinned against heaven and against you// Coming to one’s SENSES isn’t an easy thing.. Situations and afflictions usually have a way of taking away our senses and after a very long run we find ourselves dancing to what the situation dictates instead of what our SENSES should dictate. A mind renewal or mind reknewing is a PRACTISE which is worth investigating because in it lie the secret of transformation. A pattern is always established by the way we formulate our thoughts and if one is not careful he will end up following his own created pattern a certain patterns set by other people. So periodic flushing and refreshening of our MINDS is of quiet importance such that the INNER MAN is allowed to operate effectively. Hanah was in a need of a child and there was a priest at the altar of God, a seasoned old priest who knew the WAYS of God when Hanah stepped up to pray. Hannah didn’t lift her voice aloud but spoke within the depths of her heart just as the woman with the issue of blood did and just as the Prodigal Son did.. It us written like this // Now Hannah, she SPAKE in HER HEART ; only her lips moved, but HER VOICE WAS NOT HEARD therefore Eli thought she had been drunken. And Eli said unto her, How long wilt thou be drunken? put away thy wine from thee. 1 Samuel 1:13‭-‬14 KJV // Hannah might have always trusted that Eli the priest could have taken her issue to the LORD GOD and but eventually realised that it was not working then chose to to put aside protocol and FOR HERSELF for the hem of HIS GARMENT..and God answered her. Inner resolves play a great part in matters of faith and in a world where thoughts are bombarded by public opinions, directives, decrees and everykind of anti God voices A RETREAT to the INNER CHAMBERS of ONES HEART is of PARAMOUNT IMPORTANCE.. JESUS SAID // But thou, when thou prayest, enter into thy closet, and when thou hast shut thy door, pray to thy Father which is IN SECRET ; and thy Father which seeth in secret shall reward thee openly. Matthew 6:6 KJV//

10 Kingdoms out of the old Roman empire