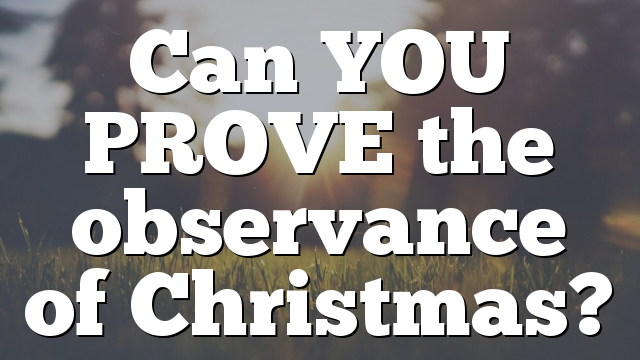 “When it can be proved that the observance of Christmas, Whitsuntide, and other Popish festivals was ever instituted by a divine statute, we also will attend them, but not till then. It is as much our duty to reject the traditions of men, as to observe the ordinances of the Lord.”
Charles H. Spurgeon, from his “Treasury of David, Volume 8”

I recently proposed the question “Is It Holy?” regarding the Christmas celebration, defining “holy” as something that is set apart and sanctified by Scripture, and more specifically Torah. Of course, the answer is “No!”, but even at that I was challenged that this is a weak argument because there are many things not “set apart and sanctified” as holy by Torah or even Scripture as a whole.

My response is that Christmas is not the same as many other things. Pizza is not “set apart and sanctified” by Scripture as “holy”, but it’s also not connected to paganism, it’s a food item. Christmas is paganism. Period. Whether or not it’s connected to the Saturnalia festival or the Yule festival, it is still part of ROMAN CATHOLIC “POPISH” PAGANISM. Make no mistake about it, if you are truly a citizen of the Kingdom of Yahweh, you cannot be connected to the Roman Catholic system, originally called the “New Roman Religion” that demanded it’s converts to renounce “all things Jewish” around the same time it invented “Christmas”.

Some people argue that it cannot be outright “proven” that “Christmas” is not connected to the pagan festivals of Saturnalia and Yule, but it doesn’t matter. In light of everything that can be proven about it, the holiday would HAVE TO BE proven to be instituted by Yahweh Himself or else it must be rejected. Celebrating it is literally putting you at risk of standing before God as an idolater.

I’ve seen others complaining that those “opposing” Christmas commit more time to “opposing it” than those who celebrate it. But look, if there is a chance that God sees this as idolatry, you better believe I am going to talk about it as much as I can to get even one person to renounce this unbiblical “holiday”.

Missionary Tongues of TB Barratt and the Soon Coming King

An expert in European Pentecostal history, Geir Lie, introduces readers to his in-depth look at Pentecostal pioneer T. B. Barratt and the early emphasis…