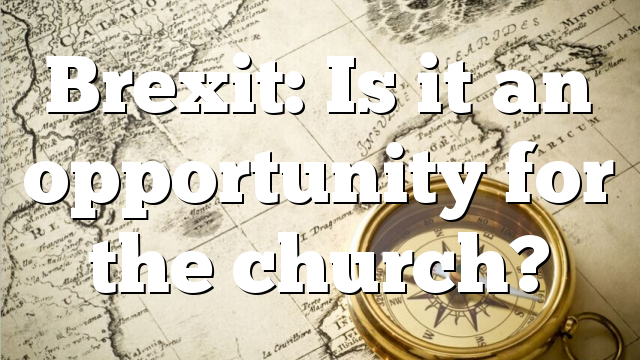 Brexit: Is it an opportunity for the church?

How can the church use the UK’s exit from the EU to show what identity, unity and hope really look like?

And so we are finally here. After all the negotiation and debates of the last few years, and 1,316 days after the Brexit referendum, at 11pm tomorrow the United Kingdom will leave the European Union.

Whether you are passionately celebrating, or convinced we are making a terrible mistake, or just plain fed up with the whole thing, there is no doubt that this is a significant moment in our recent national history. Brexit, it appears, does indeed mean Brexit.

After so many words have been written on this topic it can be hard to know what else to add. Indeed, one of the features of this week has been the understated nature of the leaving. Save for the declarations of love in the European Parliament and the failed fundraiser to ​‘bung a bob for a Big Ben bong’, it feels as if most people have already moved on. After the high dramas of 2019 it seems that 2020 (for now at least) has started with the collective realisation that there is life beyond Brexit.

It would be foolish, though, to ignore the light that the Brexit debate has shone on our society and also on our politics. Now is a moment to reflect. Social media debates suggest that our society is deeply divided, socially, economically and politically, and that we haven’t found a way to disagree well.

While we undoubtedly need a sense of perspective on all this anger, there does seem to be a common feature underpinning the viewpoints being expressed: the self – our own strength and our own ideas. We continue to look to ourselves for our national salvation whilst being oblivious to the fact that our rejection of the values of Christianity in our public life is a primary factor in the fragmentation and division that we see.

Without God at the centre of our society we have lost the value of truth. As Christians, this should make us reflect on some old truths – truths that are increasingly ignored in our fragmented national life. When there is no public truth all opposing views can be fake news. When we don’t recognise God’s image in our fellow humans our opponent becomes an enemy to be destroyed rather than a person to be loved.

But it is in this context that we are called to live out our identity, offering unity and hope. One of the features of the last few years has been the heat of the arguments – more heat than light, a sign perhaps of these arguments touching people’s core identity. But while robust debate is a sign of a healthy political culture, it can also distract us from the truth that politics, although important, was never meant to provide all our answers. As Christians we are free from our lives being defined by what happens politically. Instead, we are children of God, and it is from this primary identity that we engage with public life – from lives built on the solid rock of Christ.

In a divided society the church has a role to heal and a role to witness. The 1 Corinthians 12 image of the body points to how we live out our identity together, modelling unity within our diversity. ​“Just as a body, though one, has many parts, but all its many parts form one body, so it is with Christ” (v. 12).

Where there is division in our communities (and families), we can model what unity looks like within a healthy community. Where there are broken relationships, we can model healing. Where there is despair, we can bring hope. Sometimes it may seem as if divisions within the church are as intractable as those outside. However, this unity is what we are called to model, and we must trust that where God calls, God equips.

In 1 Peter 1 we see what this hope can look like. God’s people, battered, bruised and on the margins, are called to be a people of a living hope – a radical, solid, transformative and certain hope. Hope with a name: Jesus. ​“He was chosen before the creation of the world, but was revealed in these last times for your sake. Through Him you believe in God, who raised Him from the dead and glorified Him, and so your faith and hope are in God (v. 20 – 21).”

We are called to speak it, proclaim it, live it, and model it. This is not a naïve or superficial hope but rather a hope based on the transformation we ourselves have experienced through the power of the gospel, meaning we are not knocked off course by the chaos that surrounds us. Praise God we can offer this hope to the world.

So, while Big Ben may not be bonging at 11pm tomorrow, as we mark this significant moment, may we move into this next phase of our national life as those telling a different story – confident in our identity, resolute in our unity, and modelling hope. And as this new chapter in the history of our nations begins, let us start to ask, what kind of society do we want to become?