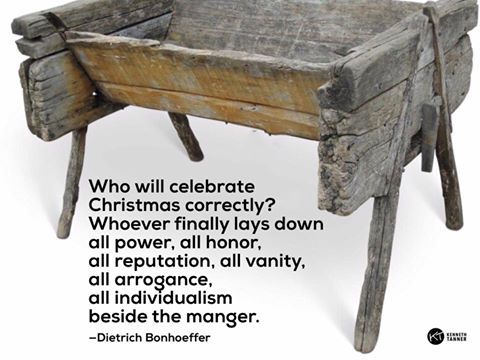 “Who will celebrate Christmas correctly?
Whoever finally lays down
all power, all honor,
all reputation, all vanity,
all arrogance, all individualism
beside the manger.” —Dietrich Bonhoeffer

December 17, 1933.
The Nazi party has come to power in Germany. The first concentration camp, Dachau, has been built. Göring has denied that the Jews are in any danger, only a few months before boycotts of all Jewish-owned businesses in Germany, the passage of laws forcing all “non-Aryans” to retire from legal professions and civil service, the introduction of a law to legalize eugenic sterilization. The Gestapo is officially formed. Massive book burnings are staged.

A protesting and Protestant pastor named Dietrich Bonhoeffer has left Germany for Britain, telling his mentor Karl Barth “it was time to go away into the wilderness.” One could hardly blame him. The national church synod at Wittenberg had passed a resolution to apply “the Aryan paragraph” to church positions, requiring the removal of any pastors or church officials who were of Jewish descent. Twenty thousand “German Christians” had rallied to demandd the removal of the Old Testament from the Bible. Even with the growing ranks of the Emergency League, fighting back against the “Aryan paragraph”, Bonhoeffer felt that his rejection of Hitler and Nazism was not finding enough support.

In London, on December 17 1933, the gospel text was Mary’s Magnificat: “God has performed mighty deeds with his arm; he has scattered those who are proud in their inmost thoughts. He has brought down the rulers from their thrones but lifted up the humble. He has filled the hungry with good things, but sent the rich away empty.”

From his pulpit across the sea, it is impossible to believe Bonhoeffer did not have his eye on Germany when he spoke:
“We must be clear about how, in the face of the manger, we shall think about what is high and what is low in human life in the future. … God is not mocked. It is not a light thing to God that every year we celebrate Christmas and do not take it seriously. His word holds and is certain. When he comes in his glory and power into the world in the manger, he will put down the mighty from their seats, unless ultimately, ultimately they repent. … Who of us would want to celebrate Christmas correctly? Who will finally lay at the manger all power, all honor, all reputation, all vanity, all pride, and all selfishness? Who is content to be lowly and let God alone be high? Who sees the glory of God in the humble state of the child in the manger?”

At One with the Suffering and Joy of His People

In the Face of the Manger

FacebookTwitterSubscribe
Subscribe to receive all news to your email or phone: [wysija_form id="1"]
bonhoeffer

There is NO post-Trib Rapture?