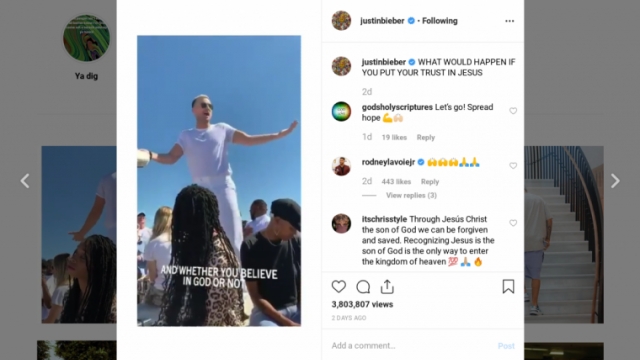 Bieber asked his 117M followers to put their trust in Jesus

His two most recent posts are snippets of Vous Church pastor Rich Wilkerson preaching at a recent Kanye West Sunday Service. “Whether you believe it or not, and whether you believe in God or not, He still believes in you,” says Wilkerson in the clip, drawing applause from the crowd at the Sunday Service.Both posts are captioned by Bieber with an invitation to his Instagram followers to put their trust in Jesus.

“WHAT WOULD HAPPEN IF YOU PUT YOUR TRUST IN JESUS,” he wrote in capital letters.

In the second post, he told them: “Put your trust in jesus.”

The posts were received positively by his Christian followers, with many writing to thank him for sharing his faith. At one point in his life, Bieber was struggling with the pressure of fame and attracting increasingly negative headlines over his bad behaviour.  But that all changed after he recommitted himself to his Christian faith and wiped the slate clean by being baptized in a bathtub. Hillsong New York pastor Carl Lentz and City Church, Seattle, pastor Judah Smith are among his closest friends and mentors.  He has often used his Instagram page to share his Christian beliefs and inspirational messages with his followers.

HAUNTED HOUSE EXPERIENCE in your CHURCH Are you planning one for Halloween? Is it Biblical or demonic? Will it really get people saved for…