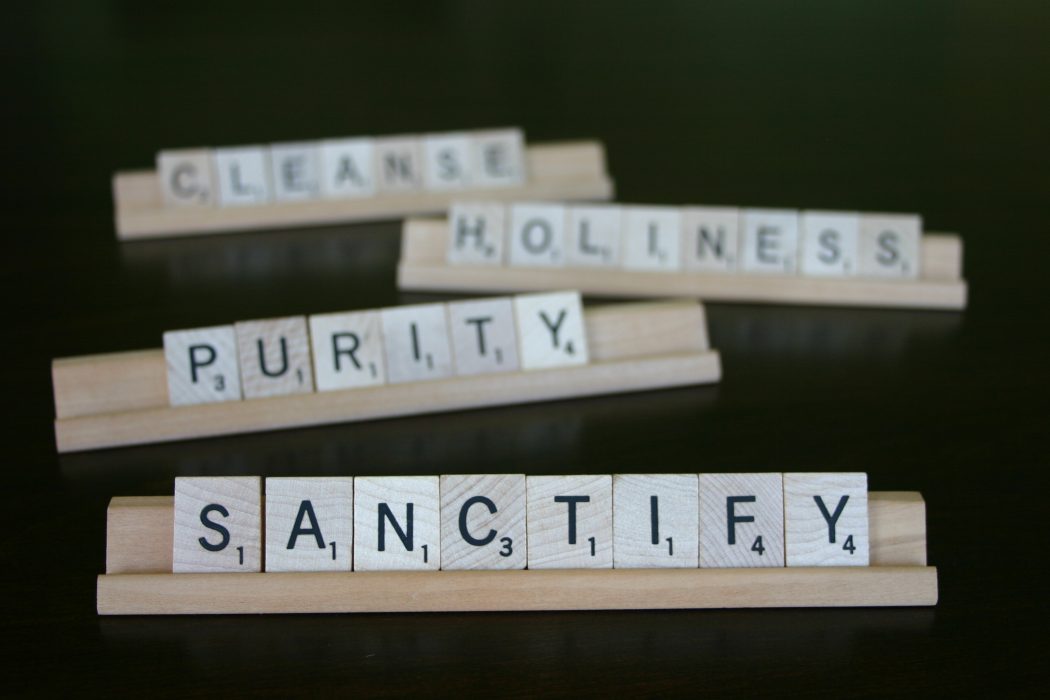 Chapter IV SANCTIFICATION BY THE OFFERING OF THE BODY OF JESUS

Chapter V BEING ONE WITH THE FATHER AND THE SON

For several reasons, the word sanctification is often misunderstood or misused. A story that has been around since my childhood days helps illustrate one way this happens. That story tells how some blind people were taken for a visit to experience an elephant up-close so they could better visualize it. As they were ushered into a group around the elephant, the first person to come in direct contact with the huge animal found its tail. “Oh,” he said, “An elephant is like a rope.” Another person at the opposite end commented that he thought an elephant was rather like a snake, as he examined the trunk. One who had found a leg differed, he said, “Its plain to me that an elephant is like a tree.” The one who had bumped into the massive side of the elephant said he could not agree at all, an elephant was very like a wall. And so the story went, illustrating how that if we know something about a subject, and we know that detail very well, still we might not understand the big picture at all. That difference is tantamount to saying an elephant is like a rope instead of saying an elephant’s tail is like a rope.

Another problem is our language itself. If you look in a dictionary for the meaning of a word, you may find the same word has several different meanings. For instance ‘work’ may be defined as an exertion, or ‘moving an object through space.’ Work also means function, as in, “My wife and I found a diet that really works.” A painting or a piano concerto may be called a work. Context is a vital part of the meaning of words; so looking in a dictionary for isolated meanings can be very much like examining one of the parts of an elephant and then supposing that you have the whole picture. Sanctification has more than one meaning and this seems to confuse far too many people. We will explore three different meanings for the word sanctification.

One meaning of sanctification applies to inanimate objects that may be sanctified by being set apart, or dedicated, to a religious service. This meaning applies both in heathen religions and idol worship as well as in the Bible. Ceremonial holiness certainly is one of the intended meanings of sanctification in the Bible. We notice that Moses sanctified the brazen altar before any sacrifices could be offered upon it, Leviticus 8:10-12. Ancient Greek theology was mythology and idolatry, so the root meaning of sanctification in Greek is limited to the ceremonial sanctification of inanimate objects. Those who try to confuse us by saying that in Greek, sanctification just means ‘set apart’ are correct, but at the same time they are very much confused about the meanings of the scriptures.

In the New Testament we find that the unbelieving husband is sanctified by the wife, and the unbelieving wife is sanctified by the husband (1 Cor 7:14). Sanctification by contact or by association is a clear Biblical meaning. In Mat 23:18 Jesus said to the Pharisees, “(Ye say that) whosoever shall swear by the altar, it is nothing; but whosoever sweareth by the gift that is upon it, he is guilty. Ye fools and blind: for whether is greater, the gift, or the altar that sanctifieth the gift?” In the Old Testament, when Moses turned aside to see the burning bush that was not consumed, he was told, “Put off thy shoes from off thy feet, for the place whereon thou standest is holy ground.” So even the very ground upon which Moses stood to talk to God was Holy. Still another example of this kind of sanctification occurs when we are saved. It is the office of the Holy Spirit to convict us of sin as God calls us to repentance. It is by the operation of the Holy Spirit that the blood avails for us and a new name is written down in Glory. We are sanctified by the presence of the Holy Ghost when we are saved. However, that clearly is not the sanctification Jesus prayed for for us in John 17.

This may not be a perfect example, but it helps with the explanation. When we are born, we are immune to all the communicable childhood diseases to which our mother was immune. She provided that immunity to us. However, as we grow, our body is renewed on a continuing basis. And since we obtained that immunity by contact with our mothers and did not generate it ourselves, it is lost as we grow. So before we start school, our parents are usually asked to supply a record of our immunization to the school. Otherwise, they fear, the population of the school may succumb to communicable childhood diseases. The sanctification bestowed upon us at salvation is not from within our own heart, so we still need to be sanctified as provided in God’s plan for us.

SANCTIFICATION BY THE OFFERING OF THE BODY OF JESUS

At the communion of the ‘Lord’s Supper’ He broke bread and said, “Take, eat; this is my body. (Mat 26:26) And he took the cup, saying, “This is my blood of the new testament, which is shed for many for the remission of sins. (Mat 26:28). If we eliminate the body of the Lord so we can give more emphasis to His Blood, we have changed what he said and we no longer have an accurate, or balanced, gospel. He also said, “Verily, verily, I say unto you, Except ye eat the flesh of the Son of man, and drink his blood, ye have no life in you. Whoso eateth my flesh, and drinketh my blood, hath eternal life; and I will raise him up at the last day. (John 6:53-54.)

Heart sanctification makes us one with God and displaces the fallen nature of Adam with a new nature that is at one with God. It all happens as one instantaneous operation. However, as clearly indicated in John seventeen, this is intended for those who are not of the world even as Christ was not of the world.

BEING ONE WITH THE FATHER AND THE SON

If I needed a skin graft on my forehead and could find a willing donor who was my age, complexion, gender, and ethnic background it would look good, but it would not ‘take’ unless my immune system had been deliberately ‘doctored’ so that it could not recognize what happened. Otherwise my system would ‘reject’ that graft as a foreign invader. Skin taken from my own lower leg would certainly look funny with its different texture and the straggly hairs growing there, but my system would accept it without question because it is already a part of, or ‘one’ with me. It is our DNA that identifies what is foreign and what is not foreign to us. The DNA in each cell of our bodies is one and the same. Heart sanctification does something inside us that makes us one with God so that our very nature is no longer foreign to His. This is not scriptural, but I think God switches-off some of our genes and switches-on others to alter our very personality when we are sanctified as represented by the golden altar of incense in the tabernacle. Our joy is greater than when we were saved and the ‘songs in the night’ are also increased because we now enter a new phase of the grace of God. This is not a sermon nor am I a preacher, but we need to identify what kind of sanctification results from being ‘one with God the Father and His Son Jesus Christ and with our fellow saints’ which is different than the previous two meanings of sanctification already mentioned. Incense offered at the golden altar is now being reenacted by the praise that goes up to God from a sanctified heart.

In the wilderness, Moses reared up a tabernacle at the instruction of God who told him to beware that he make it according to the pattern he had been shown in the mount. First there was a court where sacrifice was made and where confession and restitution were made. Next was the Holy Place with the golden altar of incense. And thirdly there was the Most Holy place with the Ark of the Covenant. Here in the Most Holy Place blood was offered on the Day of Atonement. Those who object to a gospel with three steps have a quarrel with God and his plan. It should be rather obvious that God does not gradually forgive our sins and gradually save us and gradually write our names in the book of Life. It should be obvious that God does not gradually sanctify us either. Nor are we baptized with the Holy Ghost gradually. There is a specified pattern of gradual Christian growth listed in Second Peter 1:5-8, where we add Christian graces one at a time, but that pattern tells us the things that we must do. God gave a pattern to Moses in the wilderness of three stages of holiness wherein it is God who provides the action when we meet the specified conditions. Meeting the specified conditions may be slow for us, but once there, the work of God is accomplished at once in our hearts.

Let no one deceive you about the true meanings of sanctification by reciting the Greek root meaning which Jesus did not use nor imply in John seventeen. It is better to study the scriptures for one hour than to study ancient Greek for ten hours. Only scripture interprets scripture correctly. Heart sanctification cannot be obtained by ceremonialism anymore than salvation can be obtained by the ceremonial “putting away of the filth of the flesh.” (1 Pet 3:21). It is only by the offering of the body of Christ, and that meaning is not found in ancient Greek mythology or idol worship.

“Make Way for the Holy Ghost”