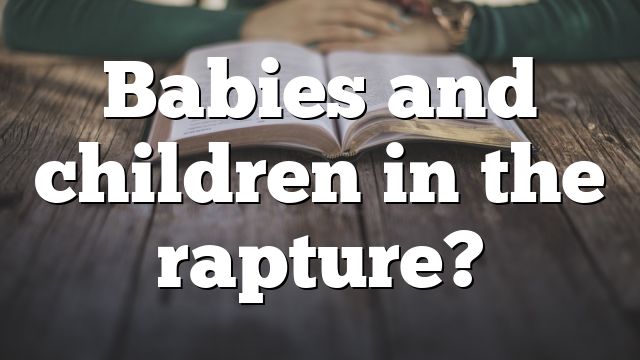 What will happen to babies and young children at the rapture? Will children be raptured?

There are three clear biblical passages that speak of the rapture of the church in which believers will be taken directly to heaven to be with Jesus (John 14:1-3; 1 Corinthians 15:51-58; 1 Thessalonians 4:13-18). None of these passages states what will happen to babies and young children at the rapture. What does this mean?

A look at other portions of Scripture suggests that God likely takes those too young to confess faith in Jesus Christ to be with Him in heaven upon death. For example, when David’s infant son died, he said, “But now he is dead. Why should I fast? Can I bring him back again? I shall go to him, but he will not return to me” (2 Samuel 12:23). It is clear David does not have in mind the grave or death in general since he takes comfort in the fact that he will one day join his child. Instead, David had in view being with his son again in the presence of the Lord.

Based on this same principle, it is likely that babies and young children will leave earth to be with Jesus in heaven at the rapture. Though they have not yet expressed faith in Jesus Christ, He is the atoning sacrifice for the sins of all, including those unable to place faith in Him (1 John 2:2).

Another issue related to this question is the view held by some that only the children of believers will be taken in the rapture. This view is based on the faith of the parents rather than the grace of God. Salvation is by grace alone through faith alone in Christ (Ephesians 2:8-9). It is not dependent on others but on Jesus alone. A parent’s faith cannot save a child so it does not make sense that a parent’s faith, or lack thereof, would be the determining factor in which children are taken in the rapture.

Yet another related issue is what some call the age of accountability. While all children are born with a sinful nature (Psalm 51:5), Jewish tradition held that a child became an adult at age 13. In other biblical passages, men were not counted as members of the nation of Israel until the age of 20. There is no specific age of accountability mentioned in Scripture, and many people have come to faith in Jesus at a young age. Yet there are certainly times in the Bible that God distinguishes how He treats young children differently than adults.

As parents, grandparents, family, and friends of children, we must teach young people the importance of believing in Jesus Christ at an early age. Samuel worshiped the Lord as a boy. David and King Josiah also obeyed the Lord in their youth. While the Bible offers hope for babies and young children to be with Jesus, it is also essential to, “Train up a child in the way he should go; even when he is old he will not depart from it” (Proverbs 22:6).

If I am honest this question never really ever crossed my mind, nor really bothered me until I became a father myself. Now that I have young children, I couldn’t help but wonder what the Bible says will happen to babies, infants, and young children who do not know Christ when the rapture takes place. This blog is an attempt to help us wrestle through the Scriptures and come to some sort of conclusion.

There are 3 Main Views when it comes to the Rapture and children and babies.

View 1: No children or babies will be raptured since the rapture is for believers only. Since babies or children are too young to believe in Jesus for the forgiveness of sin then they cannot be participants in the rapture and will be left behind.

View 2: All babies and children will go to heaven when the rapture takes place. Several passages in the Bible seem to support this view such as 2 Samuel 12:20-23, Matthew 19:1-15, and Mark 10:1-16. But since Scripture teaches that small kids and infants go to heaven when they die, does the same apply to the rapture or are they two different issues?

View 3: Infants and young children of believers will be raptured to heaven before the Tribulation. Paul says in 1 Corinthians 7:14 that in a Christian family the children are “set apart for Him”. Since the Bible commands Parents to raise and protect their children (Proverbs 22:6; Ephesians 6:4; 1 Timothy 5:8) it would be hard to believe that he would rapture believing parents leaving their children helpless and therefore not there preventing them from being able to obey his command to raise and protect their children. There are several examples from Scripture that give support to this view: Noah and his Sons, Lot and his two daughters, in Egypt during Passover the children whose parents put the blood on the door was passed over by the death angel being spared by God’s judgment.

Since Scripture teaches that babies, infants, and younger children go to heaven when they die, I can hardly agree with view 1 in saying that babies, infants, and younger children are not participants in the rapture. While I do not know whether or not all babies, infants, or young children will participate in the rapture it is assuring as a believing parent to look through the pages of Scripture and see that God does seem to also faithfully deliver the children of believing parents from coming judgment. To be honest, I believe that the second view will triumph over views 1 and 3 and I believe the entire revelation of God’s Word allows us to believe this to be a very reasonable view.  No matter what view one takes, it is important that God in whatever he does is perfect, merciful, and full of grace.

FacebookTwitterSubscribe
Subscribe to receive all news to your email or phone: [wysija_form id="1"]
andbabieschildrenrapturethe

Have Christians given up on the Great Commission? Warning. This article contains sharp edges. Jesus gave the command to His followers to take the…