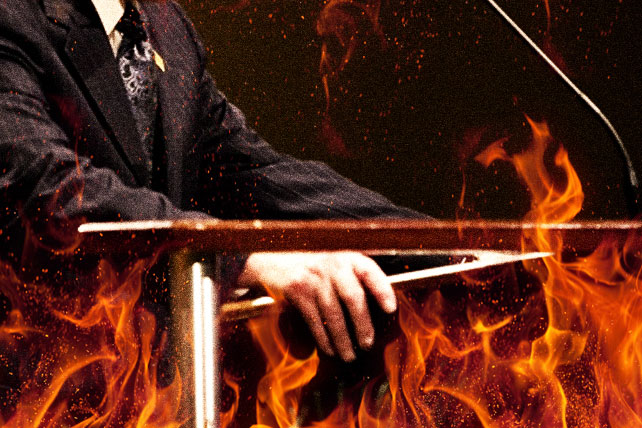 I already know the answer to his question, but I’m gonna ask it anyways: Are Paradise (Abraham’s bosom) and heaven the same thing?

William Lance Huget [01/25/2016 8:01 PM]
No. In the Old Testament, Sheol/Hades had a righteous/unrighteous compartment. After the resurrection, the righteous compartment is empty and to be absent from the body is to be present with the Lord in heaven. The unrighteous temporary area is still occupied and will eventually be cast into the lake of fire. Surviving Tribulation saints will go into the earthly millennial kingdom, while OT saints, Church Age saints, dead Tribulation saints will be raised with glorified bodies and be primarily in heaven with access to earth..

John Kissinger [01/25/2016 8:19 PM]
maybe yall can answer this then http://www.pentecostaltheology.com/when-was-hell-created/

Paradise is now part of the third heaven. Prior to the resurrection & accension of our Lord Paradise was a part of the place of the dead, or Hell, called Abraham’s bosom.

The righteous (disembodied ) dead no longer rest in Abraham’s bosom, but in the presence of the Lord, awaiting the resurrection at His return

Brian Roden [01/26/2016 6:01 PM]
The Hebrew has Sheol (which some of the newer English translations just transliterate, instead of translating and substituting an English word that may not correspond exactly). In context, this is basically saying the place of the dead is going to get bigger, because there’s going to be a lot more deaths due to judgement. It says nothing about eternal state in punishment or blessing (hell or heaven/paradise in our current terminology).

At the final resurrection and judgement the ones whose names are recorded in then book of life go to heaven and those not recorded are cast into the lake of fire.

John Kissinger [02/24/2016 10:12 AM]
I’ve heard this before but just recently a discussion was started again on “Has hades always existed?” It is certainly not featured too much in Jewish writings, right Rick Wadholm Jr? From where, Catholicism got the idea that hell will not be eternal, right John Ruffle? What’s the point of preaching then – right Brody Pope Christopher Hart Timothy Carter Corey?

In this discussion, we talked about, the different places, and theories of torment.

See also: http://www.geonames.org/search.html?q=he…
404 records found for “hell” – I don’t think that’s 404 separate places though, and some are duplicates.

John Kissinger [02/24/2016 11:16 AM]
The question was about the connection of non-existence (no mention) of it in the OT and then the Catholic interpretation of its disappearance in the future past purging all sinners…

Troy Day [02/24/2016 6:58 PM]
Timothy Carter Ben Carson believes in that. He is Seventh Day Adventist of the so called annihilationism (no hell)

Timothy Carter [02/24/2016 10:10 PM]
Troy Day, it is sad that people don’t believe the Bible teaches the truth.
I wonder where he thinks the rich man is. Why is the rich man tormented in the fire?

William Lance Huget [02/25/2016 2:08 AM]
People who read the Bible and have doctrinal differences have an interpretative issue, not necessarily denying that the Bible teaches truth.

Timothy Carter [02/25/2016 2:21 AM]
William Lance Huget, you are correct. Just because two people see a passage differently does not mean that they are not seeking truth. This does not mean that they don’t believe that the Bible is true. However, when a person tells a blatant lie against the Word of God, such as this one then it’s obvious they don’t believe the Word of God is true.

The Word of God plainly tells us that there is eternal punishment for the wicked. Anyone, who does not believe this, is calling the Word of God a liar.

William Lance Huget [02/25/2016 3:07 AM]
I agree that it is clear in Scripture, but equally capable, godly believers through the centuries have argued for other views. They must rationalize, redefine, etc., but they honestly think we have it wrong and they are being true to Scripture. Sincerity does not create truth, though.

FacebookTwitterSubscribe
Subscribe to receive all news to your email or phone: [wysija_form id="1"]
abrahamsbosomheavenparadise