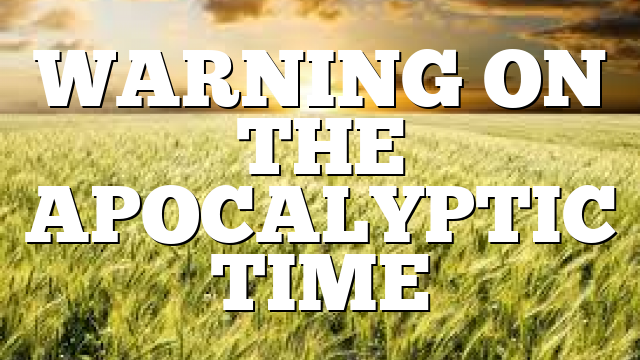 Nobody neglect of what should know about what must happen before the end of the second millennium, so that the sons of God manning on the planet, realize, at once and for ever, of the meaning on the Law of God, The Word Model and the decent cultivation of the Gifts that allow the communicability of the Angels or Messenger Spirits.

And nobody also neglect of all that God promised to Israel, and accomplished, never having in God any blame for all that the Chosen People made wrong, coming to suffer all that suffered, and suffers, for ignoring the TEACHINGS and the GRACES OF GOD to follow priests or rabbis, sellers of blasphemers simulacra.

By being right that nobody will bring another Law of God, and that will not be necessary the coming of another Model and Modeler Word, and neither the delivery of another Glorious Pentecost, and other Prophetic Apocalypse, it remain said that, only it will be necessary the coming of that similar to the Son of man, to everything restore, coming, also, to be who with the IRON SCEPTER will have to drive. Because, if the sons of God giving to wait for the occurrences, they fatally will happen…And, if they think of not waiting, they fatally will occur, causing anguish and despair far more extensive and profound. From both betraying the Law on behalf the Law, the Model Word in His same name, and blaspheming against the Gifts of the Holy Spirit, the religions, the sectarianisms and the morbid factionalisms dug to the Humanity the spiritual and moral abysm in which it is. The Apocalypse points to the facts that will have to everything RENEW. Israel, therefore, have to cooperate for the futures generations will no longer wallow in the same ignorance and misfortunes.

The END is NEAR: Turkey shot down Russian warplane