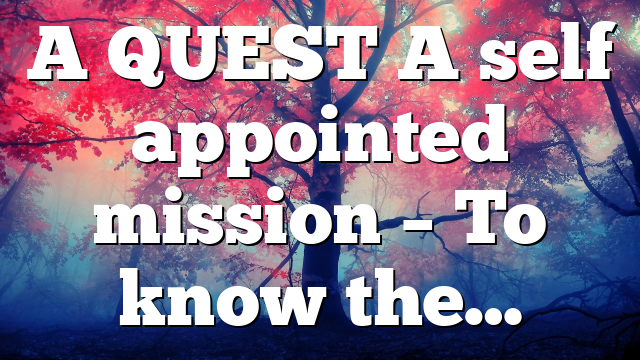 A QUEST
A self appointed mission –
To know the unknowable –
To lay hold of Deity –
To understand the incomprehensible –
Can the mind search the heavens and find the divine?
Is it reasonable to think we can know infinite Greatness?
God is higher than anything man can imagine.
A Glorious being that inhabits every atom, every quark, yet is clothed with the universe He created.
It is no wonder David said,
“Such knowledge is too wonderful for me; it is high, I cannot attain unto it.” (Ps 139:6).
No one person has been able perceive the inconceivable, yet He admonishes us to try.
Can a mortal touch the Omnipresent, the Omniscient, the Omnipotent?
His Majesty alone is too vast to comprehend.
Listen to the words of Ezekiel when he describes meeting God, and pay attention to the words in caps.
Ezk 1:26-28.

In the three sentences above Ezekiel uses the appearance of, the likeness of, or the combination of the two eleven times to bring to us what God is like and still it is impossible for us to understand.
How many times have you describe something as THE APPEARANCE OF THE LIKENESS?
When I was meditating on this last night, I cried out to God, “Then how did David know you? Or Joshua, or Moses … or Abraham?”
If God is so different from anything we can possibly imagine, how did the prophets of old know the unknowable?

Just for a moment, think of God’s Glory
What do you picture when you walk into the throne room of the universe?
Is it colorful, yet transparent?
Is it wide, deep, lengthy and inhabits all dimensions?
Could God’s Divine Glory be touched?
I challenge you to concentrate, for 5 minutes on what God and His Glory is like.
I’ll wager you can’t without something else entering your mind during that time, nevertheless try it anyway.
Stop right now, close your eyes and contemplate the grandeur of His Glory.

Welcome back.
Now that you are in the proper fame of mind, think of that Glorious Majesty once more, and how God’s love is even bigger than His Glory.
What do you think of that?
Okay, now go with the following.
The infinite, the incomprehensible, the ultimate powerful God condescended to the level of a man.
Can you wrap your mind around that?
It’s like saying our Sun, in all its splendor, decided to turn itself into a 10 watt light bulb to shine its light more closely on us. In a sense, this is what God did in the form of Jesus.
Isaiah, and David in the Psalms, describes man as a worm – the comparison is perfect.
It was the Vastness, the Infinite Glory, and the immense Grandeur of His Love for you and I, that He lowered Himself to mortal man, a worm, a ten watt light bulb, to reach us, because we are unable to reach Him.
And to top it all off He called you to share in His Glorious Kingdom.

Is it any wonder that He hates to see us sin and rebel?
In our lifetime all reverence for God appears to be gone.
He is now a cheap joke or cuss word to be laughed at and blasphemed.
And yet the average person will say they deserve a heavenly eternity while they serve other gods and idols until the time of their passing.

Christian, for the rest of today, keep in mind who you serve. Keep in mind the GRANDNESS you meditated on a few moments ago. Practice His presence – because He really is with you. He’s omnipresent, how could He not.
You can’t have two masters.
If your god is not the Glorious, Majestic, Creator of the universe, then you need to start seeking Him as such.
Being lukewarm or telling God that you didn’t have time to seek Him is not an acceptable excuse.
If you need to go back to the basics, there is no shame in that. Start with the book of John. In the first 3 verses, God will introduce you to His true Grandeur.

Holiness fire baptized movement at Charleston, TN and the Church of God at Tellico Plains

Has it been resolved as to which came first the holiness (fire baptized movement) at Charleston, TN or the Church of God at Tellico…