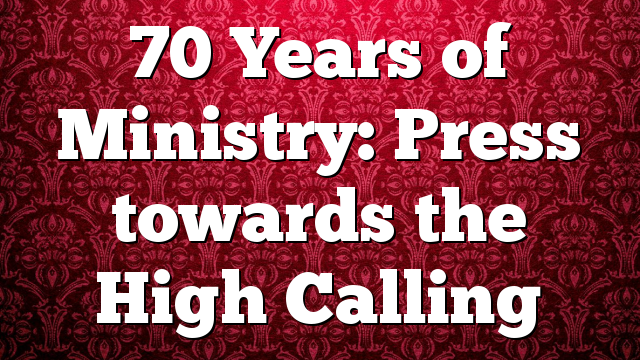 By a miracle I got home from Moscow for Christmas. What a joy on Christmas Day to join my whole family in the UK, four generations, the latest great grandson born on December 19th, just in time to join the celebration! Then meeting again with the whole family on New Year&#x2019;s Day to pray. Only one daughter and her husband in Australia not with us, but they promised to be back home this year to join the next celebrations. However, right now they need prayer as their home is surrounded by fire, with no escape road open! Tomorrow Saturday they go to the evacuation centre. But they are in God&#x2019;s Hands! Please pray for them and the thousands in Australia who are suffering.

I believe that this year will be a great blessing and we shall see many prophecies and promises fulfilled. I am confident that God is in control of our destiny as Believers. I am also convinced that Brexit was God&#x2019;s Will for our nation and that the incredible result of the last election was confirmation, as well as a remarkable answer to our Days of Prayer. I am sure that all who attended the last day on 31st August felt such a presence of the Holy Spirit who brought peace and unity. I knew that at the end of the day we had a sense of victory.

We need to pray for our Prime Minister Boris: I am convinced that he will be used of God to bring both direction and healing to our nation. God can use any man, the Bible shares many incidents where He used ungodly men as part of His Plan. Look how He used Churchill during the war and, on a personal note, Harold Wilson whom God used to rescue me from that terrible communist prison! We are facing one of the most dangerous years internationally &#x2013; but one of the greatest opportunity! Even God&#x2019;s timing of Brexit will be shown to be miraculous &#x2013; Europe needs us so badly, we shall be offered incredibly favourable trade terms, which could only be possible because Brexit has been delayed until Europe is in its greatest danger with trade and economy!

This coming year is a very special one for me &#x2013; exactly 80 years since I made my decision for Christ and I still have the decision card I signed in 1940! And of course, 70 years of full-time ministry, I pastored the Elim Church in Dorking Surrey when I was just 18 and within weeks, held my first Tent Mission in the same town! So this year will be one of celebration, not to look back, but to look forward to Scripture being fulfilled, my youth being restored as an eagle, and launching the most ambitious programme of evangelism, particularly in Central Asia, and in Europe, to fulfill the future that God is calling me to. The vision is clear, the way is not dark and uncertain, but very clear because He is leading me.

At the same time I recognise that this year will be one of the strongest Spiritual Battles of my life. God is at war against the Enemy and we are called to Fight (the good fight), according to Paul. When Jesus on the Cross said, &#x2018;It is finished&#x2019;, this was of course our salvation, but I believe that He also saw the final defeat of Satan &#x2013; as many of you have heard me say, &#x2018;God has never been defeated in battle&#x2019;!&#xa0;

2020 is both a celebration of 70 years of full-time ministry since I became a pastor and my first tent mission, and the beginning of a whole new Mission in Central Asia &#x2013; which is especially significant to me as it was part of the former Soviet Union! Let&#x2019;s not look back but move forward with an even stronger vision! I sense this will prove to be as significant as 25 years ago when the Lord Himself opened the former Soviet Union for the preaching of the Gospel from one side to the other, across 10 time zones. Now the whole of the former Soviet countries of Central Asia! I see all this as the fulfilment of Hudson Taylor&#x2019;s Vision which he had in 1889, that the last great revival would begin in Russia &#x2013; and Russian-speaking peoples would bring it into Europe, then Christ returns!

Free eBook – 19 Gifts of the Spirit by Leslie R. Flynn ($14 FREE Today Only)   Charismatic? You certainly are … if you are a Christian at all. But perhaps not in the way the term is frequently used … Continue reading →