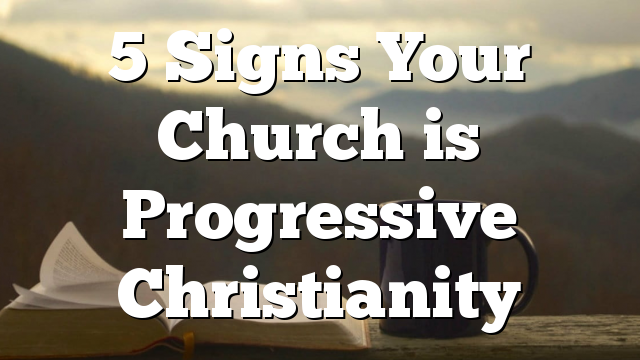 
Several years ago, my husband and I began attending a local Evangelical, non-denominational church, and we loved it. We cherished the sense of community we found among the loving and authentic people we met there, and the intelligent, “outside the box” pastor who led our flock with thought-provoking and insightful sermons. Sadly, the church started going off the rails theologically, and after about a year and a half, we made the difficult decision to leave. Today that church is a self-titled “Progressive Christian Community.”

Back then I had never heard of “Progressive Christianity,” and even now it is difficult to pin down what actually qualifies someone as a Progressive Christian, due to the diversity of beliefs that fall under that designation.  However, there are signs—certain phrases and ideas—that seem to be consistent in Progressive circles. Here are 5 danger signs to watch for in your church:

1. There is a lowered view of the Bible

​
2. Feelings are emphasized over facts

In Progressive churches, personal experiences, feelings, and opinions tend to be valued above objective truth. As the Bible ceases to be viewed as God’s definitive word, what a person feels to be true becomes the ultimate authority for faith and practice.

Progressive author John Pavlovitz wrote, “There are no sacred cows [in Progressive Christianity]….Tradition, dogma, and doctrine are all fair game, because all pass through the hands of flawed humanity.” Progressive Christians are often open to re-defining and re-interpreting the Bible on hot-button moral issues like homosexuality and abortion, and also cardinal doctrines such as the virgin conception and the bodily resurrection of Jesus. The only sacred cow is “no sacred cows.”

There are some Progressive Christians who say they affirm doctrines like biblical inspiration, inerrancy, and authority, but they have to do linguistic gymnastics to make those words mean what they want them to mean. I remember asking a Pastor, “Do you believe the Bible is divinely inspired?” He answered confidently, “Yes, of course!” However, I mistakenly assumed that when using the word “inspired,” we both meant the same thing. He clarified months later what he meant—that the Bible is inspired in the same wayand on the same level as many other Christian books, songs, and sermons. This, of course, is not how Christians have historically understood the doctrine of divine inspiration.

Another word that tends to get a Progressive make-over is the word “love.” When plucked out of its biblical context, it becomes a catch-all term for everything non-confrontative, pleasant, and affirming.

​5.  The heart of the gospel message shifts from sin and redemption to social justice

There is no doubt that the Bible commands us to take care of the unfortunate and defend those who are oppressed. This is a very real and profoundly important part of what it means to live out our Christian faith. However, the core message of Christianity—the gospel—is that Jesus died for our sins, was buried and resurrected, and thereby reconciled us to God.This is the message that will truly bring freedom to the oppressed.

Many Progressive Christians today find the concept of God willing His Son to die on the cross to be embarrassing or even appalling. Sometimes referred to as “cosmic child abuse,” the idea of blood atonement is de-emphasized or denied altogether, with social justice and good works enthroned in its place.

Identifying the signs is not always obvious—sometimes they are subtle and mixed with a lot of truth. Progressive Christianity can be persuasive and enticing, but carried out to its logical end, it is an assault on the foundational framework of Christianity, leaving it disarmed of its saving power.

We shouldn’t be surprised to find some of these ideas infiltrating our churches. Jesus warned us, “Watch out for false prophets” who “come to you in sheep’s clothing, but inwardly they are ferocious wolves” (Matthew 7:15). So if you spot any of these 5 danger signs in your place of worship, it might be time to pray about finding fellowship in a more biblically faithful church community.

Orthodox Rabbis: Christianity A ‘Divine’ Gift To The World A group of Orthodox rabbis have issued a public statement calling Christianity a gift to…