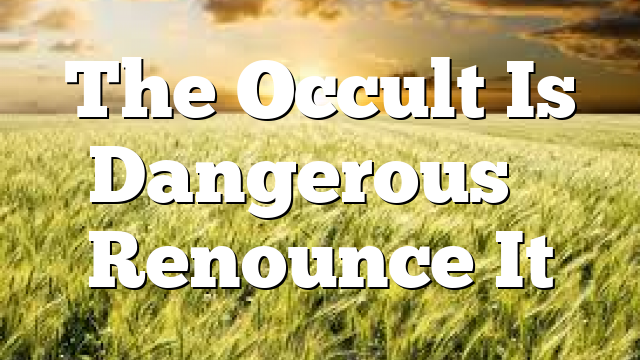 Young believers may not yet have been taught this, but occult practices are highly dangerous and should not only be totally avoided but renounced. Even seemingly innocent interests in things like the daily horoscope. Sister Anita McCoy points out, in a post in the Erie Awakening group, that “the power of deliverance is taking on new strength in this hour to expose and dismantle spirits of sorcery, divination, and hypnotic masquerades alluring the people.”

Horoscopes can be occult practices powered by Satan, or simply superstition, but even the latter is an attempt to get information supernaturally from the wrong source.

This is an important word to get out. Occult practices like horoscope, fortune telling, Ouija boards, witchcraft, séances and other spiritualist attempts to communicate with the spirits of the dead, ghosts, Satanism, mediums, psychics, Transcendental Meditation, new age practices, etc., are more than superstition (a belief or notion, not based on reason or knowledge), they are dealing with real spiritual entities, but they are from the evil one and will subtly destroy. Horoscopes can be occult practices powered by Satan, or simply superstition, but even the latter is an attempt to get information supernaturally from the wrong source.

“Let no one be found among you who sacrifices their son or daughter in the fire, who practices divination or sorcery, interprets omens, engages in witchcraft” (Deut. 18:10). “He [King Manasseh] did evil in the sight of the Lord according to the abominations of the nations whom the Lord dispossessed before the sons of Israel…He made his sons pass through the fire in the valley of Ben-hinnom; and he practiced witchcraft, used divination, practiced sorcery and dealt with mediums and spiritists. He did much evil in the sight of the Lord, provoking Him to anger” (2 Chron 33:2,6).

Anything supernatural that isn’t from the Lord is from the devil and is a counterfeit designed to entrap people.

Modern translations of the Bible and their use. A lively discussion on key current issues of the Bible, modern culture and international politics. The…