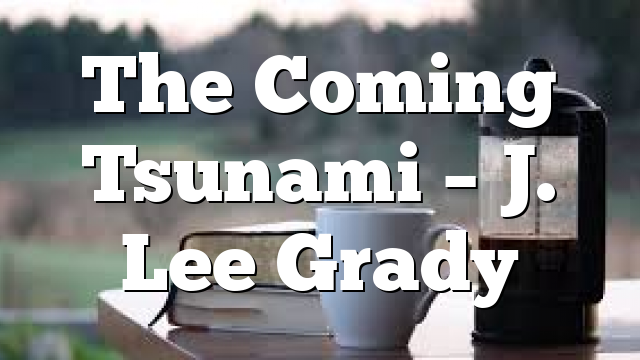 The Coming Tsunami in the Catholic Church – J. Lee Grady

[This article was of interest to me since I was raised a Roman Catholic, and was Born Again then, and in December 1973, I was Baptized in the Holy Spirit as a part of the Catholic Charismatic renewal of that time, turning my life upside down and inside out for the Lord. It didn’t take me long to leave the R.C. church as I grew in the Lord. But I still have a love for my Catholic heritage and Catholics everywhere. May this new wave of the Holy Spirit yet come upon them as described here by J. Lee Grady in this 2013 article – Ray E Horton].

I believe God showed me He is sending a wave of His Spirit to bring reformation.

More than 10 years ago, I had the most vivid dream I’ve ever experienced. I told my wife about it the moment I woke up because it was so profound. The scenes are still etched in my memory.

I dreamed I was standing inside the Vatican. Keep in mind that I’ve never been a Catholic, and I’ve never visited Italy. But in my dream, I was in an ornate hall decorated with marble columns and a fancy paved floor. I walked over to a huge, arched window where I could see a panoramic view of Vatican City.

Suddenly a huge wave appeared on the horizon. A tsunami was coming. The wave got closer and closer, but I did not feel panic, even though I could hear people running and yelling as they prepared for the impact. I stood near a wall and braced myself.

When the wave hit, the palatial building began creaking and tilting. Antique tables, chairs, candelabra and statues began sliding to one side as the floor moved. Chandeliers were hanging at odd angles. Within minutes the floor was perpendicular to the ground and more furniture came crashing down. The movement continued until the floor became the ceiling. More religious icons, statues and paintings fell and broke into pieces.

Religious icons, statues and paintings fell and broke into pieces

In my dream, I did not feel anxious about this catastrophe. Nor did I ask the obvious questions: How could a tsunami reach that far inland since the Vatican is almost 20 miles from the Mediterranean coast? How could a tsunami turn a huge building upside down? And why was there no water anywhere? I knew in my dream that what I had witnessed was a spiritual event.

At that point I heard a commotion at the other end of the hall. When I got close enough, I discovered a group of Catholic nuns and priests who were praying in the Holy Spirit. They had their hands raised and they were worshiping God fervently, as if they had experienced another Pentecost.

The atmosphere was spiritually charged. Yet, as these people prayed, a man dressed in ornate religious garb began to shout angrily at them in Italian. He was obviously not happy with the way these Catholics were behaving. This upset me, and I began to rebuke him. I was speaking in my prayer language, so I didn’t know what I was saying. But I knew God was rebuking the leaders who were opposing His work.
At that point, I woke up. And I felt the Holy Spirit say to me: “I am going to turn the Catholic Church upside down.”

I don’t believe all dreams are from God. Sometimes our brains just think in Technicolor while we sleep. Other times a dream is simply a crazy subconscious reaction to the pepperoni pizza we ate before bedtime. But in this case, I have come to believe God was showing me something big that He plans to do in my lifetime.

Pope John Paul II was still in office when I had this dream. Pope Benedict has since come and gone, and this week, cardinals are electing a new leader—at a time when the world’s 1.2 billion Catholics have been reeling from reports of child abuse and sex scandals among clergy.

A great shaking is coming to the Catholic system

I believe a great shaking is coming to the Catholic system, and it will have both positive and negative impact. God is not pleased with man-made religious structures in any denomination that hinder people from knowing Him, and He is serious when He asks us to tear down the idols we have created to take His place. In the end, God always judges idolatry.

On the flip side, He also cares about the millions of people in the Catholic Church who call upon the name of Jesus and who desire His presence. For them, the coming wave of God’s power will unleash a new hunger for the Holy Spirit and God’s unadulterated Word. As corruption is exposed and structures are shaken, I expect to see Catholics around the world experience a 21st-century reformation movement. Traditionalists will fight it, of course, but dead religion is powerless when faced with genuine spiritual awakening. Young reformers from various nations will challenge the system and say, like Moses said to Pharaoh, “Let My people go” Ex. 5:1.

I know there are many of my evangelical brothers who have written off Catholics as heretics, and they leave no room for redemption or reformation. They’d rather see the whole system crash and burn. Perhaps they forgot that we have our own idols, sex scandals and institutional corruption, and that we need a spiritual tsunami to turn us upside down as well. I’m bracing myself as I pray. Send the wave, Lord.

[J. Lee Grady is the former editor of Charisma and the director of The Mordecai Project themordecaiproject.org
His latest book, “Fearless Daughters of the Bible,” will be released in Spanish next month from Casa Creacion. You can follow him on Twitter at @leegrady. This was posted 9:39AM EDT 3/13/2013 at http://www.charismamag.com/blogs/fire-in-my-bones/17042-the-coming-tsunami-in-the-catholic-church]

Christ is Risen in the Fields of the Wood at Burger Mountain in Murphy, NC

Christ is Risen in the Fields of the Wood at Burger Mountain in Murphy, NC World largest display of the Ten Commandments For schedule…