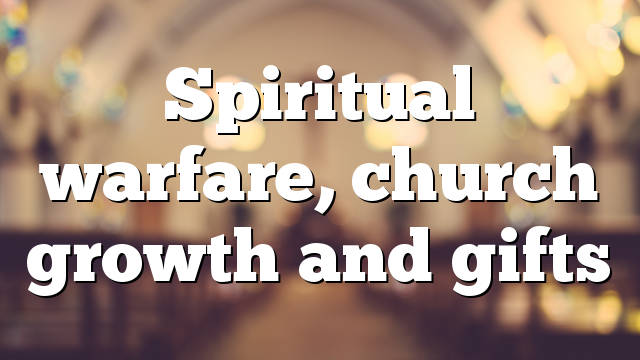 With regard to church growth, spiritual warfare has a great importance for Wagner. We will now
turn to examining how spiritual warfare affects church growth and how spiritual gifts serve of
spiritual warfare and church growth. Spiritual battle, also FDOOHG ³VSLULWXDO ZDUIDUH´ RU ³VSLULWXDO
PDSSLQJ´389 is based on Wagner¶s world view,390 justified by him in terms of cultural
anthropology391 and Pentecostal theology.392 Wagner also calls the cultural anthropological
FRPSRQHQW RI VSLULWXDO EDWWOH ³SKHQRPHQRORJ\´393 Resane interprets this term to mean that
subjective experience is judged by the individual leader or by individual Christians. Resane argues
incorrectly ± because the process is not automatic – that phenomenology leads to relativism in
LQWHUSUHWLQJWKH6FULSWXUHV ³$VWKHworld of meaning changes, so God¶s revelation to his chosen
RQHVFKDQJHV´394 Van der Meer argues perceptively that Wagner¶s theology of spiritual warfare is
built upon older assumptions about spiritual warfare found within Pentecostalism, assumptions
which Wagner incorporates into his own theology. These assumptions include the idea WKDW³GHPRQV

get a point of entry in people through sin, trauma, idolatry, occultism, heredity and curses.´395
Wagner, however, goes beyond the individual and applies these assumptions to people, groups, and
territories.396 Indeed he justifies his view of spiritual warfare by also referring to the Great
Commission.397 Wagner is accused of adopting a good-versus-evil dualism in relation to nonChristian
religions, but this dualism can be interpreted as consonant with the first Commandment.398
Comparing some of the literature of mainstream Pentecostals to that of Wagner, Van der Meer
argues that Wagner incorporates mainstream Pentecostal doctrines into his spiritual warfare
theology. These include, for example, praise and worship as spiritual warfare and prophecy as a
channel of God¶s leading and speaking.399 The influence of the Dispensationalist spiritual warfare
theology of Mark Bubeck which talks about territorial spirits and binding the strongman400 in city
Crusades, is also discernable.401 Holvast notes, that Wagner uses Patristic sources not only as
anecdotal references, but to confirm his theory of spiritual mapping. Wagner cites Gregory
Thaumaturgus, Martin of Tours, Benedict of Nursia and Boniface in order to cite historical
precedents for the power encounter.402 I interpret Hall¶s research to mean that referring to the
church fathers (as Wagner does) is not rare in dispensationalist theology.403
According to Wagner, the Christian has spiritual weapons and authority over the evil spirits which
he must exercise. He puts it ³,I&KUistians did not exercise their µauthority in Christ¶, evil could
RYHUWDNH WKH 86´404 An individual also has a responsibility to fight against the demons and to
overcome them. Wagner argues that to win the spiritual battle, the Christian¶s relationship with God
has to be ³sufficient.´ The criteria for sufficient relationship with God include: being born-again, a

regular prayer life and being filled with the Holy Spirit. To achieve these criteria a Christian must
confess all his sins, search for inner healing for his continual sins, allow others to evaluate his
spiritual life and in addition his sanctification must be ³sufficient´ for using the gifts.405
Wagner¶s view of spiritual warfare against territorial spirits, dominating particular geographical
areas is based on his interpretation of deities, mentioned in the Bible as demons, beings which have
power to control geographical territories. ³7KH%LEOHWHDFKHVWKDWWKHWKLQJVZHWRGD\FDOOµterritorial
spirits¶ do exist. A key passage is found in Daniel 10 where the µprince of Persia¶ and the µprince of
Greece¶ DUHPHQWLRQHGVSHFLILFDOO\´406 Stevens points out clearly that these angelic princes do not
rule over geographical areas. For example the Archangel Michael protects the people of God rather
than a territory. He concludes that in the same way the princes of Persia and Greece protect sociopolitical
rather than geographical areas.407 In the Letter of James, Wagner discovers confirmation
that Elijah¶s prayer was specifically ³warfare prayer´ (Jas 5:17-18), although there is no mention of
the term in the passage in question.408 Wagner seeks cultural grounds for the notion of territorial
spirits in the studies and findings of certain cultural anthropologists that in some cultures (for
example Zimbabwe) geographical areas have their own dominating spirit.409 Hart goes too far
suggesting that WKLV³HPSLULFDOGDWDDQGXQELEOLFDOVRXUFHV´FDXVHDserious problem for theology.410
Miller argues properly that Wagner emphasizes human control in the battle against demons.
$FFRUGLQJWRKHUWKH³3UD\HURI&RPPDQG´PHDQVthat a Christian is able to exercise his authority
over evil.411 :DJQHUGRHVQRWKRZHYHUUHIHUWRKXPDQDXWKRULW\EXWWR³GHOHJDWHGDXWKRULW\´IURP
Jesus to a Christian.412 Van der Meer, citing Lowe, interprets warfare prayer as an aggressive and
militant tone on the part of Wagner. This criticism seems exaggerated, however, because Wagner¶s
battle of prayer is directed against forces of evil, not human beings.413 The essential principle in

Wagner¶s view of warfare prayer is the emphasis on quantity, which leads to an emphasis on prayer
as a technical requirement. ³«,VXJJHVWSDVWRUVDQGRWKHU&KULVWLDQOHDGHUVDJUHHWKDWDPLQLPXPRI
PLQXWHVSXVKLQJ IRUKRXUDGD\EHRXUQRUP IRUGDLO\SUD\HUWLPH«,WLVPRUHDGYLVDEOHWR
start with quantity than quality in daily prayer time. First, program the time. The quality will usually
IROORZ´414 This mechanical aspect and adopting an exact strategy of prayer are not based on
Scripture itself, but on a theology based on commercial ideology and the principle of quantity. As in
the business world the quantity of investment is related to the results, in Wagner¶s theology as well
WKH TXDQWLW\ RI SUD\HULV UHODWHGWRWKH VL]H RIWKH EOHVVLQJ³,I \RXDUH VWDUWLQJ IURP VFUDWFK XVH
short-range goals and plan to increase the time gradually. If this sounds quite demanding to you, try
VWDUWLQJ ZLWK PLQXWHVWKHQLQFUHDVHLWWR «4XDOLW\ ZLOO FRPH RYHUWLPH , RQFH KHDUG0LNH
Bickel say that if you set aside 60 minutes for prayer you may begin by getting 5 good minutes. But
tKHQWKHEHFRPHWKHEHFRPHDQGWKHTXDOLW\LQFUHDVHV´415
4.4. Factors affecting the distribution of the gifts
Wagner interprets many gifts psychologically. He associates a number of temperament and
personality traits with certain spiritual gifts as John Stott does.416 The gifts of leadership and faith ±
which are essential for the pastor of a growing church ± are related to personality who dares to take
the risk of failure. The possessor of the gift of pastor does not do this, because of his temperament.
In giving him a cautious character God has determined him to be a pastor of a small church. Thus
Wagner¶s understanding of spiritual gifts becomes psychologized.417 Certain personal
characteristics can be inferred from the spiritual gifts that an individual has received. Humble
behaviour is not psychologically suitable for one with the gift of leadership; rather he must be a
³OHWWHUKHDG´418 Wagner argues that a service-oriented weak leader may even cause the decline of a
church¶s membership. He interprets psychologically the parable of the servants and the talents their

character for Dominion theologians as can be seen by the names of the intereceived in the Gospel of Matthew (25:14-30). Wagner says that the problem of the servant with
one gift was basically psychological: negative thinking. Thus Wagner associates spiritual success
with positivity and failure with negativity.419 Having linked the principle of positive thinking to his
theology, he arrives at the conclusion that negative thinking is sinful. This interpretation, which in
my view is partly psychological, can be seen as well as in his understanding of the gift of prophecy.
According to him individuals with the gift of prophecy are pessimistic in their preaching. From his
perspective of positivity, pessimism and criticism are problematic, because they are to be avoided
and not always be taken into account. On the other hand, in the scriptural view the gift of prophecy
of a pessimistic nature is meaningful, because it is found in the Old Testament. As a result of the
polarization of these two principles, psychological pessimism related to the gift of prophecy may
exist because of the Scriptures, although it has no meaning from the perspective of ideology of
positivity.420
Wagner also distinguishes the spiritual gifts by gender. Although he writes that the gifts belong
equally to women and to men, their distribution, however, appears to emphasize the man¶s
dominant position. This distinction is based on the different psychological characteristics of each
gender. According to Wagner the gift of leadership requires the ability to take responsibility, which
for him is a characteristic of men, because the possessors of the gift of leadership tend to be men.
Wagner¶s idea (based on quantitative estimates) that the gift of leadership is rare among women
seems fatalistic and even chauvinistic. However Wagner ties this idea to creation and to the equal
worth of the different charismas. Women, says Wagner, are not often leaders but they possess other
valuable gifts. He states explicitly: ´:KLOHVRPHZRPHQFDQWDNHFKDUJHWKHSHUFHQWDge who can,
DQGZKRDUHDOORZHGWRE\WKHLUFRQJUHJDWLRQVLVFRQVLGHUDEO\ORZHUWKDQIRUPHQ´421 The offices
of leadership (in the United States) are male-dominated.422 Another gift which Wagner understands

419 Wagner 2005as masculine is teaching.423 On the other hand, there are also several clearly feminine gifts. In
addition to the gift of pastor these are the gifts of intercession and evangelist.424 According to
Wagner¶s studies as many as 80 percent of the persons possessing the gift of intercession are
women.425 Wagner¶s specificity here is reflected in the gender contradiction between the gift and
office of pastor. According to it the clear majority of individuals in pastor¶s office are men, but the
gift of pastor is explicitly female-dominated.426
It can be concluded that in Wagner¶s theology the abilities corresponding to some gifts can also be
produced by a person. A good example of this phenomenon is the gift of leadership. Leadership
ability can also be obtained by other means than the spiritual gift given by the Holy Spirit. Wagner
notes that a capable church leader does not necessarily have to possess the gift of leadership. An
individual can also learn leadership. Learning in this case may mean modification of personality
through therapy. Here Wagner appears contradictory. He argues on the one hand that only the Holy
Spirit, not any human being, distributes the spiritual gifts. On the other hand he argues that the
capability which replaces the gift can be obtained through the works of therapists and a motivated
Christian. Therefore, pragmatism is essential to Wagner: it does not matter whether the gift of
leadership or an acquired skill is used, as long as a church grows.427 In Chapter Five we will see that
Wagner has also other theological focuses that only church growth.

TODAY IS THE 5th IN OUR CHRISTMAS MESSAGES