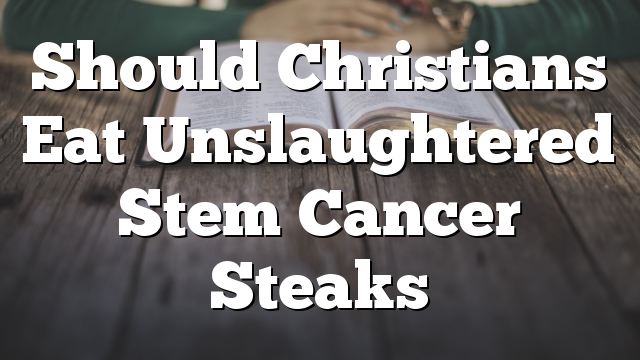 Should Christians Eat Unslaughtered Stem-Steaks and Cancer Steaks and Nuggest?

My wife’s father’s side of the family has a lot of Lutherans and some Pentecostals, Charismatics and very few Muslims. Among the Bataks of Sumatra, the Lutherans typically will eat pork or water bufallo ‘saksang’ made with the blood poured back into the meat and cooked into the dish. At a large family reunion, they made a blood-free version for the Pentecostals, Adventists and Muslims.

Pentecostals from GPDI oppose blood in the meat because of ‘abstain from things strangled and from blood’. These instructions for Gentiles from Acts 15 seems to be related to God’s commandment to Noah, the ancestor of the Gentiles an all peoples who he instructed not to eat the meat with the lifeblood in it.

Many years ago, I had an idea for a science fiction show or movie. There is a big vat full of goo used to grow meat from cancer cells or stem cells. There could be ‘cancer steaks’ or ‘stem steaks.’ Of course, several years alter, I read that there was a start-up developing stem cell meat technology.

There is a theological problem here. Many western Christians pay little attention to the issue, but those remaining of the12 apostles, Paul, Barnabas, and the elders of Jerusalem wrote a letter instruction Gentile Christians to abstain from blood. A generaion or so later, non-Messianic Judaism would later require a similar, but longer, list of things from Gentiles for them to be considered righteous without being circumcised. In the Old Testament, animals had to be slaughtered to get the life-blood out, and this was likely the perspective the Jewish apostles had on meat.

So now, there is fake meat grown in a lab. Is this something Christians can eat? If the animal the cells were taken from was properly slaughtered, may Christians eat the stem-nuggets?

Can a person deliver himself of demons?

The question is often asked of me, “Can a person deliver himself of demons?” My answer is “Yes”, and it is my conviction that…