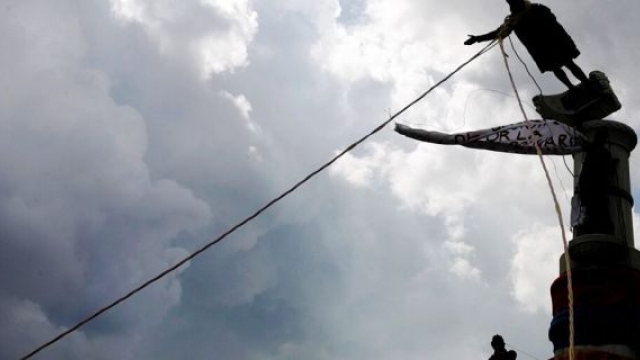 “I’ve seen movements like this before,” he warned last month.

The Florida businessman is hardly alone among those who fled socialist countries. On social media and in interviews with Fox News, other immigrants who settled in the U.S. say that recent political shifts here – including class warfare, riots and language policing, not to mention calls for expansive government programs – are starting to remind them of what they left behind.

And they carry the same message as Alvarez, urging Americans not to repeat history.

“The millionaires, and anyone that was rich, were ‘the enemy of people’ in Venezuela,” Elizabeth Rogliani, a young woman who left Venezuela for America in 2008 and lives in Florida, said of her former country (though she cited a term that President Trump now controversially uses against the media).

She has been using her TikTok channel to try to tell people about that history. Rogliani says she sees a parallel in politicians’ frequent attacks on “millionaires and billionaires.”

“Division between the classes was something that Hugo Chavez wanted — to make sure that poorer sectors of society hated anyone that was wealthy,” she said. Venezuelan president Hugo Chávez often declared that being rich is bad.

Once, before Chavez became president in 1999, Venezuela was the wealthiest country in South America. Venezuela also has more untapped underground oil than any country in the world, even Saudi Arabia.

But after Chavez ruled for more than a decade — enacting strict price controls and seizing private businesses — the economy collapsed. Last month, after decades of mismanagement, the country’s last oil rig shut down. Millions have now fled amid mass starvation and violence.

Rogliani said that in America, her biggest fear comes not from any one policy proposal – but from the overall culture.

“Seeing these riots knocking those statues … it’s so similar,” she said.

“In 2004, the Columbus statue came down in Venezuela. It was torn down by mobs. People had been encouraged by Chavez’s rhetoric,” Rogliani said.

The origins of unrest in the U.S., of course, are very different and unique to this country. Activists have pressed for years to take down statues dedicated to the Confederacy, arguing the country should not be honoring those who fought on the side of slavery. The push has expanded in recent months, however, to target historical figures who had been less controversial but nevertheless were connected to slavery or other institutions. Meanwhile, protests and sometimes-related looting that have hit American cities this summer stemmed from anger over racial injustice and police brutality, following the death of George Floyd in Minneapolis police custody.

Some protests continue to be peaceful, while cities such as Chicago, Portland and Seattle have dealt with more violent outbreaks for months.

Rogliani cautioned, however, that such unrest can be exploited. Chavez encouraged such thinking, Rogliani said, because he saw angry mobs as a powerful tool.

Several Latin American countries have seen an exodus of people fleeing to escape socialism. Nicaragua is one.

“What we see now has all the same characteristics as I saw there … violence, looting, damaging private property,” Roberto Bendana, a Nicaraguan immigrant in Texas, told Fox News of the recent violence in the U.S.

“Even the flags! The protesters here in the U.S. are using the red and black flags,” Bendana said, noting Nicaraguan socialist revolutionaries used the same colors.

Some contemporary churches claim that God’s Holy Spirit is physically manifested during services when a “cloud” suddenly appears near the ceiling inside the building,…