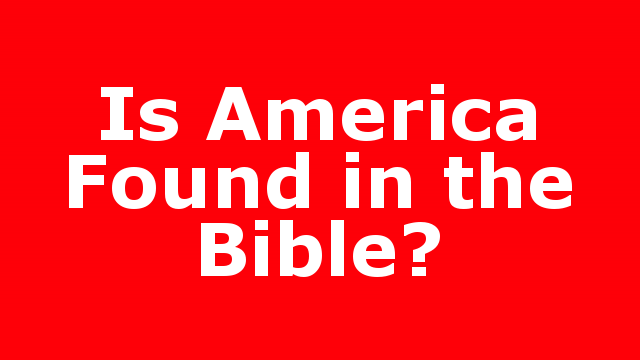 Scholars for years claimed that the United States wasn’t found in the Bible.  What an interesting statement considering how powerful, rich, worldly, sinful yet Bible professing nation we are here in these later days!  Especially so considering we are one of the lone heroes of Israel, even being the very nation that first recognized Israel back in 1948 which brought it to statehood!  To think that the lone superpower in the world would not be mentioned at all….anywhere in the Bible simply sounds strange.  China is mentioned, Russia, Iran, heck Ethiopia is mentioned and yet we are to believe God simply left the U.S. out?  Let’s look a bit deeper at a possibility that the United States really was mentioned, in great detail as a matter of fact, although under a different name…MYSTERY BABYLON!

Consider  what the Word of God says about Babylon in the last days:

So we have a fat, rich, sinful people made up of many nations that trade with the world, are musicians and craftsmen, sell their “chariots” throughout the world, whose land is full of grain, cattle, rivers, horses and sheep, have a supreme military that quickly conquers nations and have been to space.

Shame!   Shame on you so called “pastors” who are blind to the truth and declare America is not in the Bible!  Name another nation on the Earth that could fulfill all of these descriptions at one time other than America!  America even has as its symbol the Pagan god of Isis, the Queen of Heaven, who the Romans called Juno, although you might know it as The Statue of Liberty.  Auguste Bertholdi, the creator of the Statue of Liberty, was seeking a commission to construct a giant Isis statue holding a torch overlooking the Suez Canal but was denied.  Later he went on to create his dream in the Statue of Liberty.  Interestingly enough, and yes it is anecdotal evidence, but the only city in the entire world currently using the name “Babylon” is found in …New York!  Yes, 45 miles due East of New York City you’ll run smack dab into Babylon, New York.

Now you might say, “oh, this person simply hates America.”  Not so.  I would bleed on the stripes to keep the flag red.  I love my country dearly, however, one has to separate patriotism for one’s country and faithfulness to one’s religion when the two are not compatible.  I love America as a parent does a child who has been sent to prison, regretfully, mournfully, in remembrance of what they were and what they could have been.  America is not the same country it was in the 40’s and 50’s.  How can you say that it is in light of abortion statistics, murder rates, divorce rates, homosexuality rates, the wars we spread across the globe, the way we promote violence and promiscuity in our films and the system of control and surveillance we impose on our own citizens?

Why can’t America simply turn from its sins and repent?  Do you think we are on the path to becoming a more holy nation, one that reveres God’s word and seeks after his will collectively?  Does America show high regard and promote Christian ideals and beliefs or instead do we celebrate delinquency?  Simply turn on the TV for ten minutes and you will see what America believes in, a world of material wealth, of control, of satisfying every desire of your heart, simply put…America believes in sin.

How does God feel concerning this un-repentant attitude of self-professing “Christians”? First of all, consider the principle of judgment God uses concerning his own house:

Luke 12:47,48 “That servant who knows his master’s will and does not get ready or does not do what his master wants will be beaten with many blows. But the one who does not know and does things deserving punishment will be beaten with few blows. From everyone who has been given much, much will be demanded; and from the one who has been entrusted with much, much more will be asked.

1 Peter 4:17  For it is time for judgment to begin with the family of God; and if it begins with us, what will the outcome be for those who do not obey the gospel of God?

God does not stand for hypocrites to make a mockery of his word.  America puts “In God we Trust” on our money, we proclaim to be a Christian nation from our very outset.  We have preachers and churches on every corner and the freedom to proclaim “Jesus is Lord” as if we were simply stating “the sun rose this morning”.  We are the richest, most blessed nation in the world with food stacked to the ceilings. Yet we make war like it was a baseball game, we blast sex and adultery throughout the world through our movies and the internet, we boast of our achievements and how great and mighty we are as we beat ourselves on the chest and strut around in fine clothes and rush and beat our neighbors to buy the nicest TV.  Oh yes, we also abort our babies by the millions and spend millions on drugs and alcohol and pornography and sex and sports, houses and stocks, boats and cars.  But we show up every Sunday for Church, ready to hear the Lord’s message.

There have been 53 million abortions in America alone since 1973.  There are roughly 3,400 per day performed now, and these are only the ones reported though clinics.  This doesn’t count the over the counter pill abortions occurring daily in private homes across the country.  And somehow we expect there to not be judgment to our nation?

Now do I believe that America is Mystery Babylon right now?  Well, not exactly.  Even though we are a wicked nation, there is still a great evangelical movement with millions of Bible believing Christians who don’t profess or support the country’s ways.  There is also a little further, believe it or not, left to fall before it could be stamped “official”.  Babylon becomes drunk on the blood of the saints at some point in its history.  This has not yet happened in America where Christians are rounded up and killed for their testimony.  Could it happen?  Go research Fema Camp detention centers that have spread throughout the nation and get back to me and I’ll tell you with a resounded “yes” it absolutely can happen.  The Germans never imagined they would be gathering up Jews onto train cars a few years before the holocaust, either.  They were just following orders.

The most damning verse of all that describes this final Babylon nation is Jeremiah 51:9
“‘We would have healed Babylon, but she cannot be healed; let us leave her and each go to his own land, for her judgment reaches to the skies, it rises as high as the clouds.’

FacebookTwitterSubscribe
Subscribe to receive all news to your email or phone: [wysija_form id="1"]
americaBible

The Present Dilemma: The current European Muslim refugee crisis is a dilemma. On the one hand, Christians religious leaders including Pope Francis are correct…