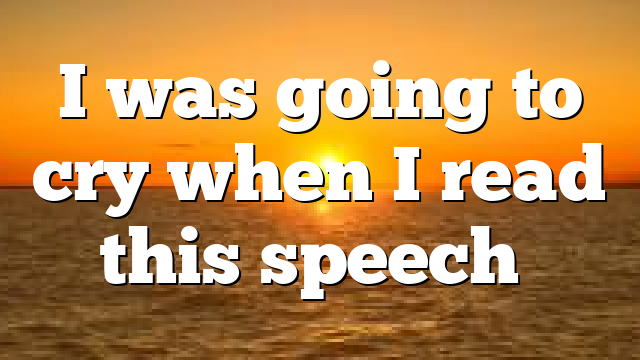 I was going to cry when I read this speech from the Prime Minister of Israel Benjamin Netanyahu, but at the end I said, “Glory to the God of Israel”

Mr. Netanyahu said:
Only 70 years ago! The Jews were taken to slaughter like sheep.
🔵 60 years ago!
🔵 no country. No Army.

Seven Arab countries declared war on the small Jewish state, only a few hours after its creation!
🔵 we were 650,000 Jews against the many millions in the Arab world!

There was no strong IDF(Israel Defense Forces).

No powerful air force to save us but only brave Jewish people with nowhere else to go.
🔵Lebanon, Syria, Iraq, Jordan, Egypt, Libya, Saudi Arabia all attacked at the same time.
🔵the country that the United Nations gave us was a 65 % desert.

🔵 35 years ago! We fought the three most Powerful armies in the middle east, and we swept them in six days.

We fought against various coalitions of Arab countries, which had modern armies and many Soviet weapons, and we have always beaten them!

🔵 a State (Country)
🔵 an Army,
🔵 a Powerful Air Force,
🔵 A State-of-the-Art Economy with exports worth billions of dollars.
🔵 Intel – Microsoft – ibm & many high-tech companies develop cutting edge products in Israel
🔵 our doctors receive awards for medical research.
🔵 we make the desert bloom, and sell oranges, flowers and vegetables all over the world.

🔵 Israel has sent its own satellites into space!

🔵 and say that only 60 years ago,
🔵 we were led, ashamed and hopeless, to slaughter!
🔵 we have experienced the smoking ruins of Europe,
🔵 we have won our wars here in Israel with less than nothing

🔵 we built our little “Empire” from nothing.

Who’s Hamas to scare me?
🔴 to terrify me?
🔴 you make me laugh!
🔴 Passover was celebrated;

Think of any time in human history ⚠

Think about it, for us, the Jewish people,
🔷 the situation has never been better!
🔷 then let’s face the world,

Let us remember:
🔶 all nations, empires or cultures
🔶 who once tried to destroy us,
🔶 no longer exist today – while we still live!
🔶 Egypt?
🔶 Babylon?
🔶 the Greeks?
🔶 Alexander of Macedonia?
🔶 The Romans? (does anyone still speak Latin these days? )
🔶 The Third Reich?

And look at us

🔵 The slaves of Egypt,
🔵 The People of Moses
🔵 The Nation of the Bible,
🔵 We are still here,

And Hebrew is still the official language of the State of Israel today:

🚩 from the time of the Bible and now!
🚩 Arabs don’t know yet,
🚩 but they will learn that there is a God.
🚩 as long as we keep our identity, we are forever.

So forgive us for not worrying,
🔶 not to cry,
🔶 not to be afraid.
🔶 things are fine here.
🔶 they could certainly get better,

Some claim our morale is low.
🔵 so what?

Only because we mourn our deaths while our enemies rejoice in the blood shed & war.

The God of Israel created the Heaven’s and the Earth.
The Guardian of Israel never slumbers or sleep! The God of Abraham, Isaac and Jacob.
Glory belongs to God !

Forward this speech to the whole community,
💙 and to people around the world.
💜 they are part of our strength

FacebookTwitterSubscribe
Subscribe to receive all news to your email or phone: [wysija_form id="1"]
crygoingreadspeechthiswaswhen

We Grow as We Practice God’s Presence ~ Ray E Horton

FEB 16 8am Ongoing awareness of God’s presence within us is an important key to our spiritual growth. God speaks to us by His…