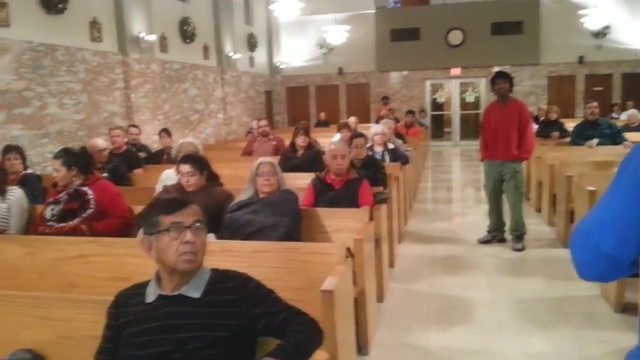 Roger David [12/11/2015 11:27 AM]
I don’t know all street preachers in the US but I know many of them. This group I am not aware of and none of my friends who preach in Las Vegas know of them either. They must be very new. Looks like they have only been around for about a year.

Ricky Grimsley [12/11/2015 12:30 PM]
Well i think they are definitely preaching to the lost. Whether or not its effective remains to be seen.

John Kissinger [12/11/2015 12:37 PM]
no really sure WHAT are they doing – sorry Ricky Grimsley I forgot Roger David from TX was the one with street preacher friends

Roger David [12/11/2015 12:46 PM]
Their intent is to try and expose the lies of catholicism and call people to repent and seek Jesus alone for their salvation. Their intent is to call people out of a dead religion and into fellowship with Life Himself.
Good intentions are nice…but the end result is rarely thought of on these “outreaches”. I believe in exposing sin and dealing with it publicly if it is a public sin…..major aspects of catholicism are most definitely in that category.

That being said I would opt for standing outside the building and waiting to talk to people as they come out or preaching from the sidewalk outside the church. I personally wouldn’t have entered and done it in this manner. I won’t knock these men for doing so if they were led of the Spirit to do it though. Stranger things have happened.

Roger David [12/11/2015 12:49 PM]
I do have friends that do this in mosques, or cathedrals being used by Muslims, and outside mosques on the sidewalks. Ruben Israel seems to be the most active in that capacity.

He even got the Arab Festival in Dearborn Michigan, which was a huge Muslim festival, shut down due to his groups preaching there. Though he and his group didn’t leave unscathed.

Roger David [12/11/2015 1:13 PM]
I myself have never preached at a mosque or outside of one. There aren’t any in my area. Praise God. However if one does pop up they will get to know me quickly. The only time I have preached to Muslims is at the Pride Parade in Houston and in Garland Tx during a Muslim convention called “Stand With the Prophet Against Terror and Hate”. A short time after this event there was an ISIS inspired Muslim shooting at the same location as they had a Muhammad drawing contest there.

Roger David [12/11/2015 2:22 PM]
She is currently out ministering to Mulisms outside an Islamic center right now. May not respond right away.

John Ruffle [12/11/2015 11:20 PM]
I have often pondered what I would do if someone comes in and threatens the priest during a service. Thanks for sharing. All we need now is fanatical fundamentalist bible thumpers.

John Ruffle [12/11/2015 11:26 PM]
I’ve disrupted a Catholic social club bingo night many years ago… several hundred present and the guy even gave me the microphone. Then when they heard my message, I was very swiftly ejected by some burly security details in a horizontal position like a missile! That was in E. St. Louis, Kansas.

Charles Page [12/11/2015 11:37 PM]
I have stood out in front of six Southern Baptist institutions in Memphis witnessing my faith and at the General National SBC offices in Nashville. I have been arrested twice, citations three times, thrown into jail for two days and have be violently hit from the back by an African American police officer and on another occasion hit from the back by a white police officer, attacked by pastors and staff with assaults and destruction of my property on two occasions.

I don’t expect to get that same treatment from an Muslims.

I AM BIRTHING A REVITALIZED CHURCH, SAYS THE LORD Ray E Horton Spoken to my heart by the Lord during prayer time this morning:…