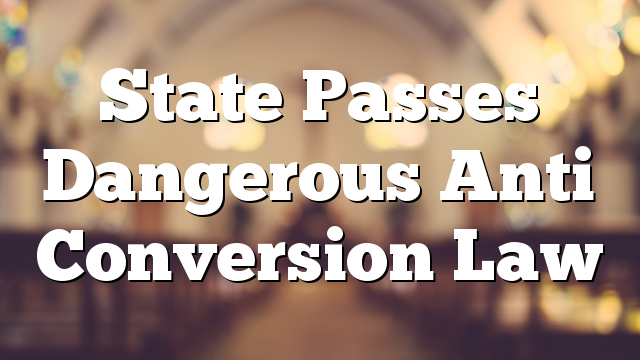 09/04/2019 Washington D.C. (International Christian Concern) – International Christian Concern (ICC) learned that the Bharatiya Janata Party (BJP) led government of Himachal Pradesh, a state located in northern India, passed a strict anti-conversion law on August 30. This is clearly in contradiction to India’s constitution and will likely be used to target its Christian citizens and threaten them with imprisonment for sharing their faith.

According to the new law, no person shall convert or attempt to convert, either directly or otherwise, any other person from one religion to another by use of misrepresentation, force, undue influence, coercion, inducement, or by fraudulent means. The bill also decreed that any marriage done for the sole purpose of religious conversion would be declared null and void.

In 2006, Himachal Pradesh enacted a similar Freedom of Religion Act that prohibited religious conversions by force or inducement. The 2019 law simply introduces stricter punishments, including sentences up to seven years in prison, for those found guilty of the same actions criminalized by the 2006 law.

Addressing the state legislative assembly, Jai Ram Thakur, Chief Minister of Himachal Pradesh and a member of the BJP, said, “We are not able to stop religious conversions after that [2006] Act. No case was registered so far despite several cases of religious conversions coming to light. The previous act needed 10 amendments, so we decided to bring the new bill. The new act will be more stringent.”

“We are not worried about the law itself as Christians abide by the law anyway,” Pastor Vinod, who leads a congregation of 450 church members in Nalagarh, told ICC. “However, we are seriously worried about the misuse of this law.”

“The law directly targets the Christian community,” Pastor Vinod said. “It is a real concern for our lives and particularly for the house churches who are in much danger.”

Radical Hindu nationalists frequently use the specter of mass religious conversions to pass laws and regulations that limit religious freedom. These nationalists accuse Indian Christians of converting poor Hindus to Christianity in mass by fraudulent means.

However, India’s own population data does not support this conspiracy of mass conversions to Christianity. In 1951, the first census after independence, Christians made up 2.3% of India’s population. According to the 2011 census, the most recent census data available, Christians still make up 2.3% of the population.

In states where similar anti-conversion laws are currently enacted, including Odisha, Madhya Pradesh, Arunachal Pradesh, Chhattisgarh, Gujarat, Jharkhand, and Uttarakhand, they are widely abused. Radical nationalists abuse these laws by falsely accusing Christians of forcefully converting individuals to Christianity to justify harassment and assault. Local police often overlook violence perpetrated against Christians due to the false accusation of forced conversions.

To date, no individual has been convicted of forced conversions in India. This is in spite of the fact that some of the anti-conversion laws have been on the books since 1967.

William Stark, ICC’s Regional Manager, said, “International Christian Concern is deeply disappointed by the passage of this legislation. These laws are widely abused by radical Hindu nationalists due to the legal ambiguity within the laws themselves. These laws provide an easy justification for radicals to attack Christian leaders with impunity. One simply needs to claim a pastor was engaged in forceful conversions following an assault. As a result, instead of the pastor’s assailants being arrested, it’s the assailed pastor who is sent to jail. With attacks on Indian Christians continuing to escalate, the passage of a stricter anti-conversion law will only incite more religiously motivated violence.”