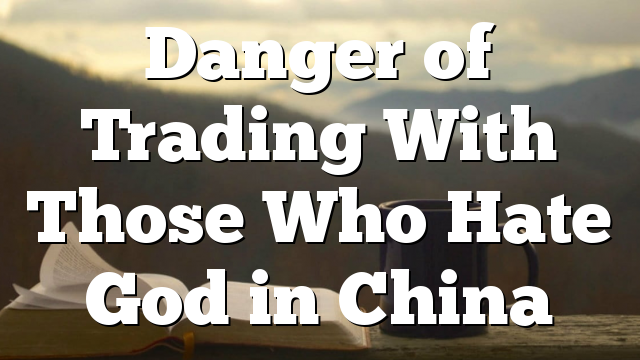 Recent news reports reveal that communist authorities are demolishing Catholic churches and shrines in China. All this is happening despite communist propaganda assuring outsiders that religion can be freely practiced in China.

Western observers thought that if they could just wish hard enough and offer concessions, the Chinese leadership would change for the better. Red Chinese autocrats would embrace the free market. The government would abandon its horrible communist ideology. Open markets would open minds, hearts, and perspectives. Catholics might worship freely.

The Church and the Communist State: The Impossible Coexistence

Somewhere there should be a proverb of ancient Chinese wisdom that says: Do not trade with those who hate God.

The dynamiting of churches offers insight into the Chinese trade policy. Those who do not respect God do not respect the moral law either. Thus, the U.S.-China trade dispute is much simpler than ancient wisdom. Even a child can understand it. One of the first lessons children learn is that those who lie, cheat, and steal are not to be trusted in any matter. To believe otherwise is an illusion.

The present trade dispute with China deals with this wishful thinking. China is now taking the next major step forward toward greater world ascendency and hegemony by directly challenging America.

Now America must decide which way it must go. Will she learn from her mistakes or continue to follow the West’s discredited wishful thinking?

From the moment of Richard Nixon’s ill-fated trip to China in February of 1972, China began opening up to the West. In exchange for becoming the world’s sweatshop manufacturer, the West agreed to look with a blind eye on human rights violations, horrific labor practices, and brutal religious persecution.

In 2001, communist China joined the World Trade Organization and received the privileges normally conceded to developing economies. Chinese goods flooded the markets and became intertwined with most global production. In general, the rule was that China provided America and the world with cheap stuff while buying agricultural products, meat, and high-profile, high-tech items like planes from America. In addition, China said it would try to better its human rights record.

In the meantime, China’s opening up continues to be a pipe dream. China is becoming more totalitarian, not less.

The present regime is using its facial recognition software to regiment and control its population. A vast Orwellian database assigns social credit scores that punish and reward compliant citizens according to their affinity with party standards. The regime is carrying out the systematic repression of ethnic minorities, including the massive arbitrary detention of Chinese Uighurs.

The whole system rests upon a $34 trillion mountain of private and public debt that corrupt officials have amassed to keep the economy humming.

Thousands of people- including the AMAH MUTSUN tribe, whose people preserve personal oral histories of Serra’s abuse – have written erect letters and signed…