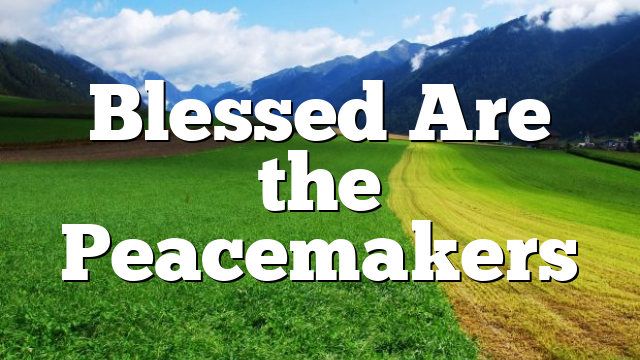 BLESSED ARE THE PEACEMAKERS by Christopher Alam

[Christopher Alam is an evangelist doing large healing crusdades in Africa and elsewhere, seeing thousands saved and healed at each. He is ordained with the The ASSEMBLIES OF GOD; Alumnus of RHEMA Bible Training Center, Broken Arrow OK, and of the Capernwray Torchbearers Bible School, Holsbybrunn, Sweden; Ex-Operation Mobilization (Served in Benelux); Dual Swedish and American Citizen; Convert to Christ out of Islam.]

The US launches a precision missile strike to take out an Iranian general who was said to be responsible for much of the death and mayhem in the Middle East.

Iran, in a face-saving gesture launches missile attacks on two Iraqi bases with US troops in them.

By now Iranian air-defense systems are jittery and on edge, expecting retaliatory attacks by US aircraft. They are ready and on highest alert.

With all the tension and nerves, the Iranians launch a missile and shoot down a Ukrainian airliner taking off from Tehran Airport. Nerves, tension, resulting in poor coordination between Tehran ATC and Air Defense Command and Control, resulting in such a senseless tragedy.

My take on this:

Wars and hatred always cause tragedies such as this. Even with the most modern of weapons, the human element causes tragedy and destruction. During the Iraq war we saw “smart bombs” end up on schools, hospitals, and air-raid shelters, killing innocent people. In 1988 the USS Vincennes shot down an Iranian airliner killing all 290 civilians onboard. Another unintended tragedy caused by jittery and nervous young men manning the missiles aboard the ship.

Blessed Are the Peacemakers

The futility of human conflict, of sinful mankind that does not know Jesus Christ as Lord

As a combat veteran having seen and experienced the horrors of war first-hand, I personally hate war because of the toll it extracts from humanity. It leaves behind widows, orphans, families devastated. Then there are those who are maimed for life, and those who are psychologically scarred and carry those wounds as long as they live.

No wonder our Lord Jesus is the “PRINCE OF PEACE.”

No wonder our Lord Jesus said, “Blessed are the peacemakers: for they shall be called the children of God.” Matthew 5:9

As a Muslim I was a warmonger, trained to take life. As a Born-Again son of God through the Blood of our Lord Jesus Christ, I live to save lives, to heal lives. I am Blessed because I am a Peacemaker.

May the Prince of Peace forever Reign in our hearts!