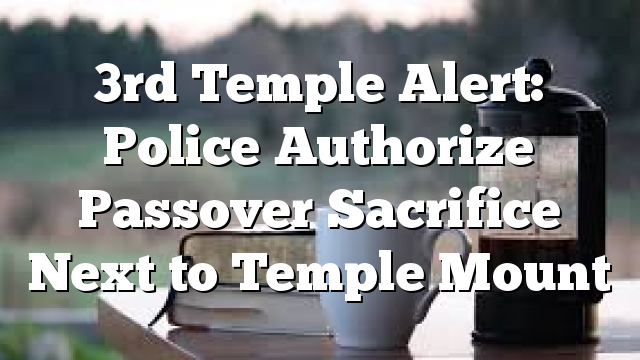 Religious Jewish factions say they are moving ever closer to the realization of the Third Temple in Jerusalem.

The latest evidence of this is police authorization, granted on Sunday, for a Passover sacrificial ceremony to be held just tens of meters from where the Second Temple once stood.

Religious groups have been holding public Passover sacrifices, in accordance with the biblical outline, for years. But never before have they been permitted to conduct the ceremony so close to the Temple Mount, which the Muslims claim as their own, even as they deny the holy site holds any religious or historical significance for the Jewish people.

Last year, the Passover sacrifice was conducted in the courtyard of the nearby Hurva Synagogue in the Jewish Quarter of Jerusalem’s Old City, some 450 yards from the Temple Mount. This year, it will take place at the Davidson Center, an archaeological park situated at the southern foot of the sacred plateau, and just below the Al Aqsa Mosque.

PHOTO: Priests sounding silver trumpets at the 2015 Passover sacrifice, which was held in the Kiryat Moshe neighborhood in western Jerusalem, miles away from the Temple Mount. (Hadas Parush/Flash90)

Would CLINTON or BUSH be the #CHRISTIAN choice in 2016?