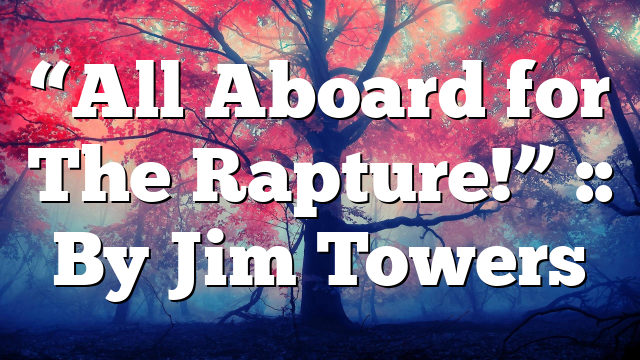 Mankind is reeling from all that they see and hear happening in today’s world. The world has gone mad. So, with urgency, and because of the nearness of the rapture, I feel called to reach out to the many actors, actresses, and directors I’ve worked with over the years individually. And so, you can expect to see open letters to each and every one of them as well as my random articles very soon. I think others would be fascinated by the stories I have to share about their favorite actors and movie stars who are “outsiders.” This will be the first of many stories and admonitions to these highly valued individuals

Suicide rates are double what they were in 2020. Even healthy young men and women are dying at an alarming rate. And so, because of the nearness of the rapture (I suppose), God has laid it on my heart to reach out to other creative people I’ve worked with in the past with encouragement and the Gospel, thereby giving them clarity from the Word of God and elusive hope in this ever-darkening world. I, therefore, begin reaching out with this story – one of countless many.

As a supporting actor in the movie “The Truman Show” with Jim Carrey, I hollered out “All aboard for Chicago” in my role as a bus conductor. As I look back on that role, I can’t help but think about how in real life I’ve been shouting out that same thing about the rapture for some time now to the common folks (people not engaged in the movie industry).

I now regret not sharing the gospel with Jim Carrey whom I ate lunch with on the set. I had every opportunity since he and I sat alone listening to Elvis Presley on his boom box, having been introduced to Jim early on by the world-famous director Peter Weir – as is usually done when two people have a scene together.

Having been in the movie business for years, I’m not intimidated by anyone in our line of work, and so I approached Jim, saying, “Hey… Elvis is my all-time favorite.” “Me too,” he answered, “Have a seat.” And since there were two director’s chairs, one for him and one for the director, I sat. (The director had left to have lunch with his wife.)

The song ended, and we began conversing about our private lives. Jim casually mentioned that he was doing artwork in his spare time; I told him I was an artist as well, and so we talked about art. Time passed too quickly, and I never even had a bite to eat, knowing that I could go to the craft table at any time and grab a bite.

We talked about working with oils, acrylics and using a palette knife. Inwardly I waited for him to revert to one of the wacky characters he portrayed, and in doing so, I lost track of time as Peter Weir yelled, “O.K. everyone – BACK ON SET!”

(I had read Jim Carrey’s life story, and it wasn’t a pretty one. In fact, it almost made me cry. And so, I was intrigued by how much we had in common.)

Today I perused Jim’s paintings on the internet and was amazed at his diversity and intensity. It made me respect him like never before. Regrettably, I never took a photo with him as I have so many others in my forty years in the movie industry. Years ago, my car was stolen with my photo album in the trunk. And so it was with a heavy heart that I had to start all over again in the middle of my career in the movie business. Another regret, as I said, is not having shared Christ with Jim. I, therefore, urge him to contact me for the answer to his depression. (Many people are experiencing depression these days.)

What people fail to understand is that actors and other creative people are human beings with foibles and emotional baggage, and they hurt just like the rest of humanity. Incidentally, people such as political leaders and lawyers are often stereotyped as being crooked and evil. But the way I see it, we are all in this crazy world, doing our best to have all the world has to offer, be it fame or money. They, like the rest of society, have their do-gooders and nut jobs. Albeit those of us who are saved have internal peace and are saved only by the grace of God. “For you are saved by grace and that not of yourselves; it is a gift lest any man should boast.” The Bible says we are all sinners.

Before I could finish this little story, I read on the internet that Johnny Depp had sold his paintings for four million dollars in less than four hours. The strange thing is that I also worked with Johnny in his last “21 Jump St.” show for television. We were in a scene together in a cab – I was the “cabbie.” (The name of the show was “La Bizca.”) As a talkative cabbie, I was given to talk about baseball nonstop with my passengers, Johnny and his partner (Penhall), in the back seat. I was surprised to learn that Johnny is a fellow artist as well! However, the most I ever sold a piece of artwork for was $1,200, although currently, I have a piece listed for $3,500.

And just so you know, Anthony Quinn, Tony Curtis, and Tony Bennett have also been painters of art, so I am in good company, and I thank God for the opportunity to have worked with such creative and talented people. It was amazing that Johnny wasn’t killed after falling off the horse during filming of the “Lone Ranger” movie; perhaps our gracious and benevolent God is watching over him and hoping he will get his life together before he dies of an overdose.

I would be jealous of these other artists, but since I am a Christian, I have something much more valuable than most people – a peace that surpasses all understanding and the hope of eternal life.

Jim Carrey – if you are aware of this writing and want to discuss your future with me, I am more than willing to share the good news of the gospel with you. The same goes for you, Johnny Depp.

I am beginning an outreach to other creative people. You can contact me for more information as it develops. In the meantime, I hope to begin filming a movie I’ve written about the times in which we live and about how we may be entering the time of Tribulation. Please join me if you feel moved to contribute your ideas or services or if you need encouragement.

Because of my contact with many Actors and Entertainers and other “outsiders” over the years, I have been tasked by the Lord to reach out to these individuals with love, understanding, encouragement, and the Gospel in these crazy end times.

Dear Jim, Johnny, you can write me at [email protected]. Or visit my website www.propheticsignsandwonders.com with comments or visit me at www.dropzonedelta.com.

The post “All Aboard for The Rapture!” :: By Jim Towers appeared first on Rapture Ready.

David McIlroy, September 2004 One of the joys and frustrations of the English language is the size of its vocabulary. This enables us to…