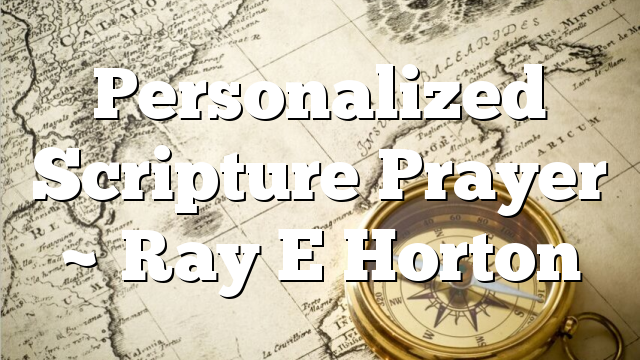 Pray these out loud daily.  They are food to heal your heart and to see others healed and restored.

Pray these out loud daily.  They are food to heal your heart and to see others healed and restored.  If you are praying for a spouse, child or other loved one to return to the Lord, or even for yourself, these are some good scriptures to personalize and pray and confess out loud on a regular basis.  Just fill in your or their name:

I pray that the eyes of ____________’s understanding be enlightened; that he/she may know what is the hope of His calling, what are the riches of the glory of His inheritance in the saints, and what is the exceeding greatness of His power toward us who believe, according to the working of His mighty power.

I bow my knees to the Father of our Lord Jesus Christ, from whom the whole family in heaven and earth is named, that He would grant ____________, according to the riches of His glory, to be strengthened with might through His Spirit in the inner man, that Christ may dwell in his/her heart through faith; that he/she, being rooted and grounded in love, may be able to comprehend with all the saints what is the width and length and depth and height—to know the love of Christ which passes knowledge; that he/she may be filled with all the fullness of God.

____________ is not conformed to this world, but is being transformed by the renewing of his/her mind, that he/she may prove what is that good and acceptable and perfect will of God.

Now may the God of hope fill ____________ with all joy and peace in believing, that he/she may abound in hope by the power of the Holy Spirit.

I will restore to ____________ the years that the locust has eaten…He/she shall have his/her needs met abundantly and be satisfied, and praise the name of the Lord his/her God, Who has dealt wondrously with him/her; and ____________ shall never be put to shame.

For the Lord knows the thoughts that He thinks toward ____________, says the Lord, plans for peace and not of harm, to give him/her a future and a hope.

No weapon that comes against ____________ will prevail, and he/she will refute every tongue that accuses him/her. This is ____________’s heritage as one who serves the Lord, and this is his/her vindication from Me, declares the Lord.

____________ trusts in the Lord with all his/her heart, and leans not on his/her own understanding; in all his/her ways he/she acknowledges Him, and He directs his/her paths.

The weapons of ____________’s battles are not of the flesh, but divinely powerful for the destruction of everything that comes against him/her. He/she is destroying speculations and strongholds and every lofty thing raised up against the knowledge of God, and he/she is taking every thought captive to the obedience of Christ.

Grace and peace be multiplied to ____________ in the knowledge of God and of Jesus our Lord, as His divine power has given to him/her all things that pertain to life and godliness, through the knowledge of Him who called him/her by glory and virtue, by which have been given to him/her exceedingly great and precious promises, that through these he/she may partake of the divine nature, having escaped the corruption that is in the world through wrong desires.

____________ seeks first the kingdom of God, and his/her right standing in Him, and all the things that he/she needs are provided for him/her.

____________ is confident of this very thing, that He who has begun a good work in him/her will complete it until the day of Jesus Christ.

Find some of your own favorite verses and personalize them

Someone might say that some of these scriptures are being used out of context. That doesn’t matter for our purposes. This isn’t a theology lesson. These are your own heartfelt prayers for a person you love, using wording from scripture. These prayers and confessions build your faith in the truth of God’s grace, love, goodness, faithfulness and promises, putting you in a position to receive the answers for your loved one.

God won’t manipulate them or force them against their free will. But He has many ways to reach them – divine appointments, dreams, ministering angels, etc. Your persistent prayer doesn’t change God’s mind to do what He already wants to do.  Rather, they invite Him into the situation and encourage you to have confidence for the answers.

Should Pentecostals PRAY for Donald TRUMP’s presidency? Many were shocked when first saw the video posted with lead Pentecostal televangelists praying for Trump in…