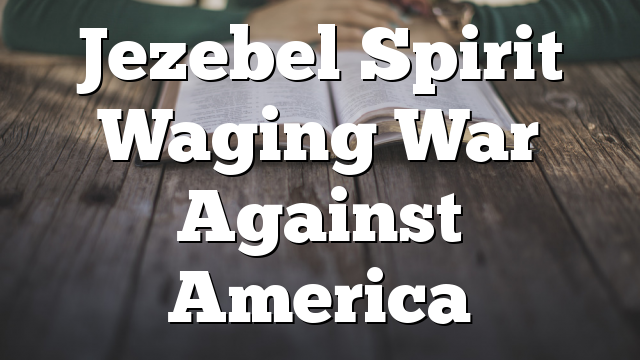 The biblical figure Jezebel died 3,000 years ago, but her spirit lives on today, and in fact, is at war with America and the American church.

This is the bold focus of a soon-to-be-released book by Dr. Michael L. Brown titled Jezebel’s War with America: The Plot to Destroy Our Country and What We Can Do to Turn the Tide.

In Jezebel’s War with America, out Aug. 6, Brown illustrates how Jezebel’s spirit is active in America and how readers can protect the church.

Jezebel was the most wicked woman in the Bible, a powerful seductress who killed the prophets, led Israel into idolatry and immorality, and emasculated men. She was seductive and determined to snuff out the voices coming against her, because these voices were calling out for repentance.

“In 21st-century America, Jezebel is not a person, but it’s as if her spirit is alive again,” Brown says. “The influence of the same demonic force is being felt in the massive increase of pornography and sexual temptation, the militant spirit of abortion, the rise of radical feminism and most importantly, in the attempt to silence prophetic voices. Just as Jezebel clashed with strong men almost 3,000 years ago, the demonic spirit of Jezebel is powerful in America, and it is going after the church.”

Brown’s eye-opening book not only unveils the satanic plot to destroy America, beginning with an all-out assault on the church, but it will equip every believer with tools to defeat the enemy in their own personal lives as well as in the nation.

For example, Jezebel’s War with America seeks to accomplish the following:

I WILL ALWAYS HAVE HOPE

[Sometimes we don’t know just what to say, but this we always know; OUR ABBA FATHER IS ALWAYS WITH US, he will NEVER leave…