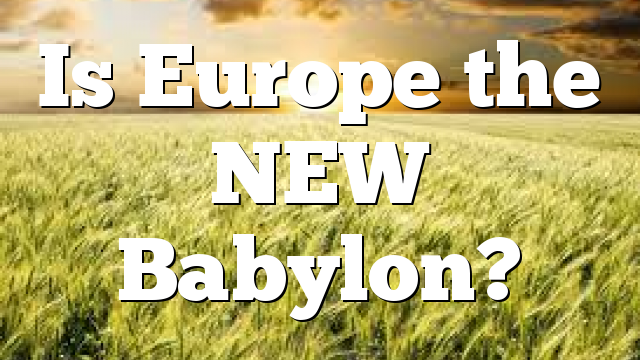 I feel that I should send this today as we wait for the decision on Brexit in Parliament tomorrow. I know we as Christians are divided.

However, this is my personal opinion, based on the evidence of my film ‘The Rape of Europe’. It is clear, Biblically in Daniel’s prophecies and demonstrated in the evidence which I presented in my well-known film produced 20 years ago, that Europe IS the Babylon of Daniel’s prophecies. The film is irrefutable evidence! The Bible says, ‘Come ye out from among them and be separate, says the Lord.’

My second point is the reason for the title of the film, the ‘Rape’ of Europe. The mass immigration into Europe is part of a planned strategy. The collapse of Christianity across Europe (including Britain) has left a vacuum, a dry river bed which will draw a flood tide not just of atheism, but false, alternative religion. It was Chiraq, as President of France, who said this many years ago. Demographically, without any war, a false religion is sweeping across Europe, some areas are already under its control. Their birthrate is 7 children, whereas in Germany it is 1.4 and about 1.6 in the UK. If you haven’t seen my film it’s available from our office.

There are only three ways in which we can control this ‘Rape’. The first is obviously by a strong and ‘militant’ evangelism of the kind that was seen in the days of Wesley. The second is by strong effective prayer, and the third is by setting barriers against the free movement of people which is part of the EU mandate.

I believe we are in the final battle before the return of Christ, this is our last opportunity to win people for Christ. I do believe in Revival, I have witnessed it in several places: in Bulgaria in the 1990s it swept the nation, but only for two years. It was Revival in Russia and Ukraine after the fall of communism. Also in Africa with Bonnke, and elsewhere. But for over 60 years my whole vision is for Europe and I am now launching a new powerful move of evangelism, in Europe, and in the new mission field of Central Asia – the countries which formerly were under the Soviet Union. This latter is important because we should plan evangelism as a military, spiritual strategy. So I am attacking the enemy from his undefended rear! And yes, Central Asia IS open! That’s why I need your support.

The other area is Israel. My ministry began there, and the Lord told me that I should end there. But the enemy is attacking me so strongly I need your prayer over the next week. I have an invitation to meet the President and Prime Minister in Israel, but the Orthodox are fighting to stop me entering the country. I need you to pray with me over the next week that God will stop them closing the door against me, the Orthodox have no respect for me or for Netanyahu! Pray with authority and power.

In conclusion, I know that Christians are divided over Brexit, but we cannot continue in this chaotic condition and we all need a clear decision – now! Please pray! I know that, as for me, I am praying for a decision and not an extension.